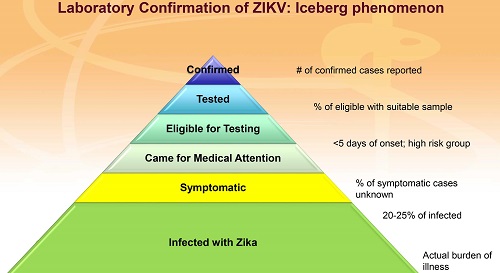 Providenciales, TCI, October 1, 2016 – Late yesterday, the Caribbean Public Health Agency or CARPHA issued a statement to refute charges that their lab is denying the public accurate figures on confirmed cases of the Zika Virus within the countries of the Caribbean.

CARPHA says they are unraveling the mystery behind the numbers and Dr James Hospedales, Director of the Agency explained, “The Caribbean Public Health Agency (CARPHA) reports that positive Zika cases confirmed by laboratory testing represents only the “tip of the iceberg.”  This means that the number of confirmed Zika cases published in the media are only a small number of infected persons, who were tested and confirmed as positive for having the disease.”

The Turks and Caicos had 11 cases confirmed at last report; there are far more  people walking around with the mosquito borne virus which is also sexually transmitted and which has invisible symptoms for some, causes brain damage in unborn babies and causes the nerve disease, Guillaine Barre Syndrome.

CARPHA provided the diagram, which is a pyramid illustrating that its tip reflects cases reported and its base reflects what cases actually exist.