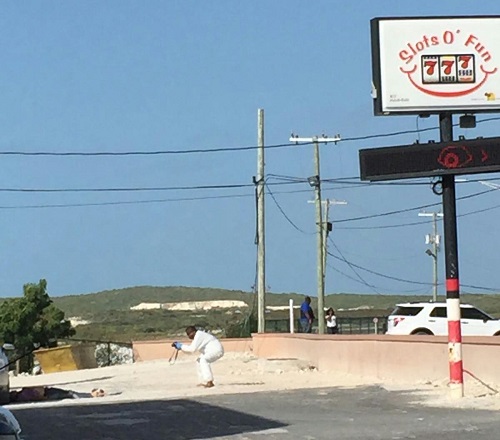 Providenciales, TCI, October 1, 2016 – A 55 year old Canadian businessman was shot in the head and about his body outside his business early Friday morning; left on the ground at the Slots of Fun gaming parlour at the Airport Hotel on Airport Road in Provo.  It is another shocking killing, the sixth murder for 2016, certainly a record in the islands.

One Magnetic Media follower returned this voice note on WhatsApp after our dispatch of the news and images of the crime scene.  “Man this a serious thing, gone are the days even if they rob you, they use to must be put a mask on their face and try rob you and at least leave you living.  Now these dudes them ain’t, I mean seriously!!!  Like how much they, Oh My God, what is a man’s life worth?  It is crazy, I mean if you’re gonna take the money, take the money, but to kill people like that man.  Shooting people down like they’re dogs or animals, people don’t even treat animals like that.  I mean listen, it’s getting depressing to hear all these foolishness going on man, it is crazy.” 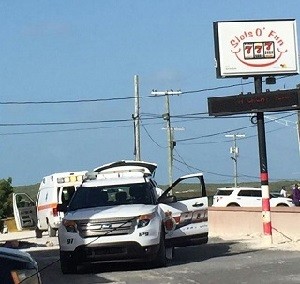 This was the overarching feeling by so many on National Youth Day holiday.  The man, who has been in the TCI for years is known for his connection to popular Grace Bay restaurant, Danny Buoys and is said to run a number of slot machines on the island.  In a late day Police report it is confirmed that it was around 8:30am Friday the call came in of shots ringing out.  Investigators arrived and the 55 year old was pronounced dead and taken to the public morgue.  He was shot multiple times; Magnetic Media is told as many as seven times.

Police are saying that they believe the motive was robbery, that it was two dark males who are believed behind the vicious crime and officers use the term that, ‘property’ was stolen… that property is likely cash and other items.  We are told the businessman was a licensed gun owner.

What investigators need now is information in the matter, so if you know anything, call it in to Crime Stoppers anonymously at 1 800 TIPS that’s 1 800 8477.

Police also confirmed to Magnetic Media earlier Friday that they did investigate a call of a stabbing in Blue Hills, but found nothing and no one when they arrived on the scene.  And despite a late night report Friday of a shooting in Five Cays, Officer Kevin Clarke said there was no report to Police.