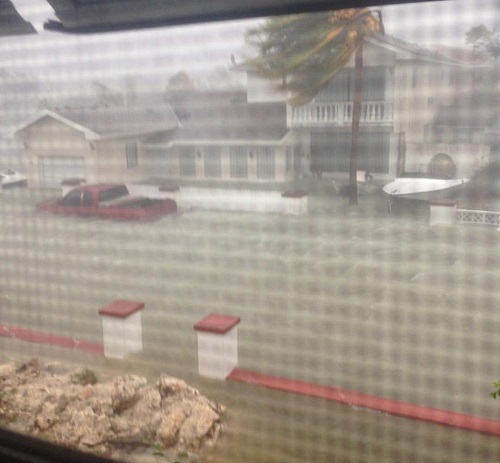 Nassau, Bahamas, October 6, 2016 – Harrowing reports coming out of Nassau as we are told that people in coastal areas are now crying for rescues, but that cannot happen and it means these individuals will have to figure out how to survive the onslaught of now category four hurricane Matthew with its 140 mph winds.
“We have reports of many people saying, oh come, homes have been compromised, the roofs blowing off or part of the roofs blowing off, and that sort of thing, and due to the high winds, medical rescue and teams were asked not to take the risk.  The broad surge to all of the southern shores, I’m only getting reports from Yamacraw, Marshal Road, Harold Road, those roads in the south eastern end of New Providence, that’s where we getting calls coming in right now.”  Trevor Basden
Trevor Basden is the Sr Deputy Director of the Bahamas Department of Meteorology and he said Nassau has up until 3 p.m with the hurricane force winds, and Grand Bahama will experience Hurricane conditions until 7 a.m tomorrow.   That gives killer storm Matthew lots of time to do the dastardly to the island which is still reeling from the hits of Frances and Jeanne in 2004 and Wilma in 2005. 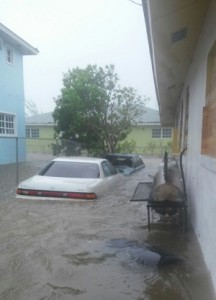 There are images of vehicles submerged in the Yamacraw area; there is a nearby beach which has caused an at least 5ft tall surge to rush in.  Basden explains, that it is not rain, it is a storm surge which has drowned vehicles and homes; even toppled the wall at Fox Hill Prison.
“Fox Hill Prison, the wall on Yamacraw side, the entire wall of Fox Hill Prison is down, it’s completely washed away.”
Many lost power last night, some this morning and the images of disaster are many… the bridge, businesses, hotels, homes, water ways and historic buildings – all abused by the unrelenting Matthew which has killed hundreds; the death toll from Haiti today soars to 108.
NEMA is also receiving reports of roofs flying off and we have gotten a report of doors of homes flying off.  There is also, likely an unauthorized expedition to save those who are stuck – remember evacuation recommendations were made for  many areas in Nassau.
“I am in a dump truck right now and we are in six feet of water, South Beach when I say is under water, we are trying to locate some people who are trapped in their ceilings.” – (rescue crew member)
A knight on a huge truck trying to plow through six feet of water he says, to get a family to safey… we pray they make it okay.
“How y’all holding up in this weather man, I’m talking about this weather so strong, it shake my bed; in my house.” – Cody (resident)
Winds are described in Nassau as violent.  Winds are described in Grand Bahama as picking up.  The storm veering more west, on a collision course with West End by all appearances.  In the west an evacuation order was given; some but not all heeded the request. And at best, official rescue operations will not be permitted in Nassau said Mr. Basden until after 3pm and even then the first responders are going out in Tropical Storm force winds which are risky.
The best news which we hope holds up as the Bahamas is bashed by Matthew; there there are no reports of loss of life. 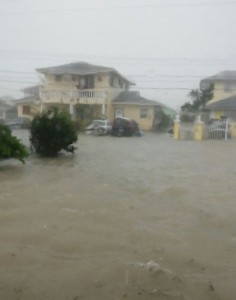 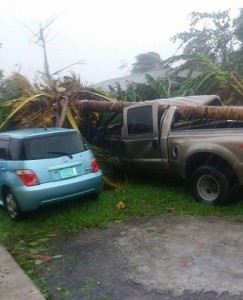 Related Topics:calls for rescue ring out in new providencecars submerged in water in nassauhurricane matthews rips through new providencemassive flooding in areas of nassau
Up Next

Governor’s farewell message – OPptimism, but a need to sharpen the public sector and retain an open economy