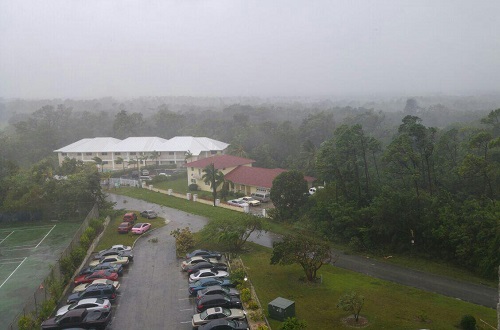 Providenciales, TCI, October 6, 2016 – Matthew tearing at Grand Bahama, residents say the winds are terrifying.  An unexpected encounter and a different class of storm is how a manager at the Emergency Operations Center set up at the NIB in Freeport, Grand Bahama described Hurricane Matthew just moments ago.

Magnetic Media was able to speak to Tammi Mitchell who confirmed that ‘yes,’ roofs of storm shelters have been compromised.

At the Foster B.  Pestaina Centre of the Christ the King Anglican Pro Cathedral, where 72 special needs patients are housed with 14 volunteers, they are praying that the roof does not blow away. Hurricane Matthew is so fierce that they cannot evacuate, even though the roof is partially torn off the building, as the Royal Bahamas Defense Force is standing by in the event the near 100 mph winds rips the covering away.  Mitchell says then, they will have to make a dash for it, somehow.

At the Cancer Association on West Atlantic Drive, the 40 people there and the structure are fine; at the St Georges’ High, the 112 people are fine and so is the structure.  Mitchell confirmed that this is not the same report for many in South Bahamia, North Bahamia and Caravel Beach where there are many calls coming in for roofs being ripped off in Cat4 Matthew.

There were valiant petitions, including video tailor-made to demonstrate the level of danger for West End which is the part of the island expected to feel the worst lashing from this dangerous hurricane; still some stayed in the fishing village.  Tammi Mitchell confirmed that a lot of the residents did leave the West End coastal area which is, as she put it, ‘under water again.’

It was a better account for the eastern end of the islands, where only seven people remained in Pelican Point; even Sweeting’s Cay residents heeded officials call to evac, and did so ahead of Matthew.

Grand Bahama often gets it, and according to Kirk James of the meteorology department, he explained that there is about 90 minutes more of the battering at 98 mph winds and then its onto the Tropical Storm force winds.  The latest National Hurricane Center model puts the eye of Category 4 Matthew just off the coast of Hunters in Grand Bahama.

For some both power and water are off.