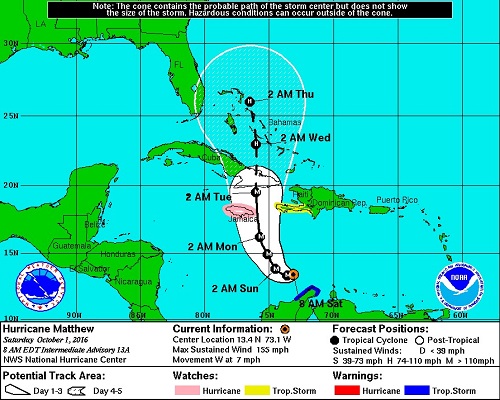 Providenciales, TCI, October 1, 2016 – Late last night Matthew again did what was not forecast to happen, he became the ultimate category 5 hurricane; fortunately this morning the National Hurricane Center says he has weakened slightly and is back at Cat4 strength.  Hurricane Matthew has sustained winds at 155mph.

Already the TCI is impacted with changes in the winds as the storm continues west for now, but should take a northerly turn which will send it over Cuba, Jamaica and through the Central Bahamas.  By tomorrow, Jamaica will encounter the storm and TCI students studying in Jamaica will be brought home today on two InterCaribbean Airways chartered flights.

A turn to the north west is forecast and there is room in that trajectory cone for Hurricane Matthew to swing more east, and if it does then the TCI would be under the gun.  Full of surprises is one way to describe what is the 13th named system for the Atlantic Hurricane Season.  Category 4 Storm Matthew is not to be taken lightly; as a Tropical Storm he killed a teenage boy who was outside trying to stop his house from flooding; a boulder crushed the child in St Vincent and the Grenadines.  Another report from St. Lucia says 85% of farms were damaged.

The TCI’s DDME has been issuing updates and urges residents to prepare; we have about three days to be ready for the system in a worst case scenario.

Related Items:tci students studying in jamaica forced out by storm, TS Matthew back to a cat 4 hurricane