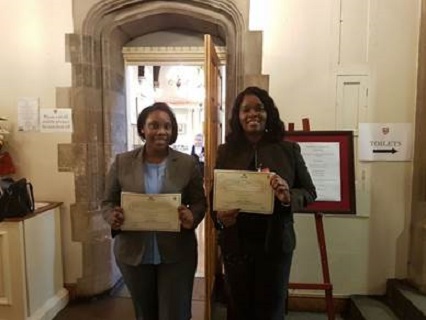 Providenciales, TCI, September 20, 2016 – The Turks and Caicos was there when 1600 of the sharpest legal minds from 600 countries legislatures met in Cambridge in the UK earlier this month.

Acting DPP, Angela Brooks and Senior Public Prosecutor, Latisha Williams are now certified following the five day symposium, with the theme:  “Economic Crime – Where Does the Buck Stop.”  Mrs. Brooks shared that, The Symposium was a most rewarding experience as it allowed us as participants to gain some knowledge and insight into other jurisdictions and their approach to economic crime.  Economic crime happens in almost every country in the world and the global effect is staggering,”
Brooks reminded that the TCI is no exception and explained how these breaches facilitate a slew of other dangerous criminal activity, she called for stricter laws, education, cooperation and national awareness.   “ Crimes such as money laundering, cybercrimes, drug trafficking, human trafficking and terrorism…  encourage criminals to continue their illicit schemes because they get to spend profits with no repercussions, more fraud on the streets, more drug related crime.”
The session rolled out strategies and exposed analyses on what works and what doesn’t… key, said Brooks was cooperation between agencies, legislators and countries.