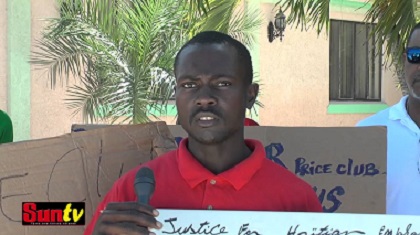 Providenciales, TCI, August 9, 2016 – The near one dozen Haitian men who called on Labour Department and Government to come to their aide after Price Club shut down and left them without any severance pay are getting an ear.  It was explained in a government issued media release on Monday afternoon that, “The first set of meetings were to be held today, 8th August, 2016, but was re-scheduled by one of the attorneys, who had prior commitments. The said conciliation sessions will be held later this week. Each employee’s claim will be dealt with fairly, with the primary aim of securing any entitlements owed to them.”

The men were disappointed in the initial reaction to their outcry, but it appears agitation and media exposure has turned the tide so that they are at least now getting a serious audience with Labour officials.

It is also said that Price Club supermarket recently fell into liquidation.  As a result their workers were presented with letters of redundancy.  After these letters were received, the employees filed disputes with the Employment Services Department and contracted two law firms to represent them.

The men promise to appear outside the Leeward Highway grocery store until they get paid.  There was a protest on Monday morning, the men also reportedly sought advice at the Haitian consulate and have been supported in their efforts by PDM Campaign Manager, Dwayne Taylor.