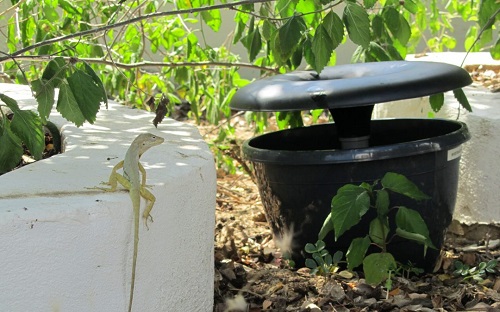 Providenciales, TCI, September 27, 2016 – The Environmental Health Department recently received 100 new In2Care mosquito traps.  These traps are intended to be used around premises where the Aedes aegypti mosquito is most frequent.  Mr. Jeffery Weisberg of Intuitive Pest Management visited the Turks and Caicos Islands to train members of the Environmental Health Staff in the use of the traps. The In2Care Trap is a novel and green control product for mosquitoes. The traps are safe for use in the environment and only affect the mosquitoes.

The traps are designed to target Aedes mosquitoes that are ready to lay their eggs. The mosquito eggs when laid in the trap, hatches into larva, but do not emerge into adult mosquitoes. The adult female, while laying her eggs become contaminated with the chemicals in the trap, which she then transfers to other breeding sites on her legs and subsequently kills other mosquito larvae and pupae.  In addition to the adult female mosquito spreading the chemicals to other breeding sites, the mosquito herself becomes ill and is less likely to bite humans and eventually succumbs to the infection and dies within 8-10 days.

Research has shown that the traps can reduce the mosquito populations by as much as 60%.