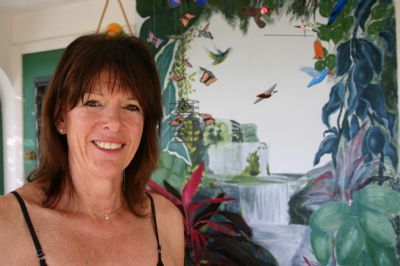 Providenciales, TCI, August 3, 2016 – Patricia Duff is known for her fiery, effervescent personality… she is passionate about young people and explained that because she is blessed, she wants to be a blessing.  Duff met with media to tell the story of how one simple question can lead to an avalanche of change in widening the opportunities to Turks and Caicos Islanders because we are more than simply a commonwealth nation, but because we are a British Overseas Territory.

Male or Female… 17 to 32 years old… even if you have been in trouble with the law; you are all welcomed to visit the website which was set up by Patricia to log your interest.  The goal was 50, last check there was well over 100 expressing an interest so that means, a recruiting team from the British Armed Forces will come to the TCI… and this can mean more than going into armed combat; there are scores of roles to be filled.

Every year hundreds of youth are graduating high school and college and many have nowhere to go, nothing to do and taking up a role in the British Armed Forces may be just the thing, the ideal remedy where not only are the talents of our young people given room to grow, but where the Armed Forces contributes to their discipline, their understanding of synergy and teamwork and their exposure to a world away from home.

There is resistance in the marketplace though.  At least one who says the British needs to use its own citizens to staff its armed forces.  Most reaction to Magnetic Media is tremendous curiosity.  To learn more, visit www dot turks and caicos dash islands forward slash jobs.