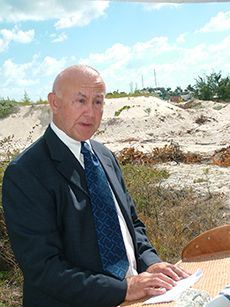 Providenciales, 03 Feb 2016 – A lot of bank statements were shown in court this morning as the Special Investigation Team’s lead attorney Andrew Mitchell highlighted payments made by Richard Padgett to Floyd and Lisa Hall.

Mitchell said while the Halls will argue that this money was for commissions and therefore legitimate, he plans to show the court that they were not.

The list of monies, in the tens of thousands moving from Padgett and even his wife to the former Finance Minister and Deputy Premier and his wife went to companies the pair owns including Paradigm and Whale Watchers.

It also revealed the level of money going to the Progressive National Party, under the leadership of Michael Misick around the time of the 2007 General Elections.

It was obviously a well funded political machine.

Mitchell says Padgett, who was working many ideas for developments including one on East Caicos wanted to create something special and very profitable in the Turks and Caicos and was seeking ‘curry favor’ from the government of the day to make his dreams a reality.

Perry reminded Mitchell that he cannot generalize and that each count against each defendant has to be individually proven and supported by actual evidence.

Mitchell said he would provide the evidence for a $75,000 dollar deposit from Mr. & Mrs. Padgett to the PNP.

Before the lunchtime break, Andrew Mitchell started to get into the meat of a South Caicos development where 7,000 acres were bought and where there were requests to fast track the project stemming from early 2006 and involving a Chicago developer.

GB Port Authority given new milestones, with extension of concessions