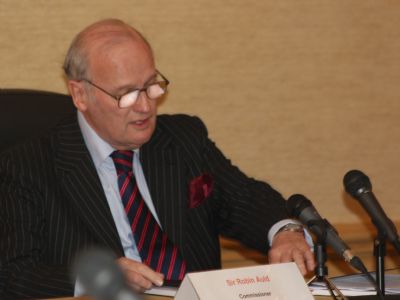 Providenciales, 19 Jan 2016 – There will be no reference to the 2009 Commission of Inquiry by Andrew Mitchell for the Crown; Mitchell yesterday told the judge the evidence presented then is not relevant to the case the Special Investigation has built against the nine defendants.

The Opening Statement of Andrew Mitchell in the SIPT trial started yesterday and is focused on how nine land deals became suspect because of how the Michael Misick led PNP Administration handled them between 2003 and 2009.

In his opening Monday, it was explained that the Crown is focused on “Bribery and corruption. The case for the Crown is that prospective developers were encouraged to pay monies in order to procure development rights; to protect investments and the government ran itself almost as a protection racket: if you don’t pay, you can’t play.”

Naturally, the defendants are resisting these allegations and will have their chance to state their version of the events.

But for now, Mitchell has the floor and advised the court that it will hear evidence related to: Water Cay, the Seven Stars Complex, North West Point, Beaches Resort, Salt Cay, Juniper Hole, Joe Grants Cay/Dellis Cay, Projects which were being proposed by Richard Padgett (East Caicos and Third Turtle Club), South Caicos and West Caicos.

The QC for the Crown is strong in his presentation and is taking his time explaining to Judge and Jury, Paul Harrison how the alleged crimes happened. Mitchell says, “…bribes were paid to the serving Cabinet Ministers in order that they would act contrary to the ordinary rules of honesty and integrity, in the manner expected of Government Ministers.”

It is a long way to go for this trial, which is not expected to call a first witness until Easter.