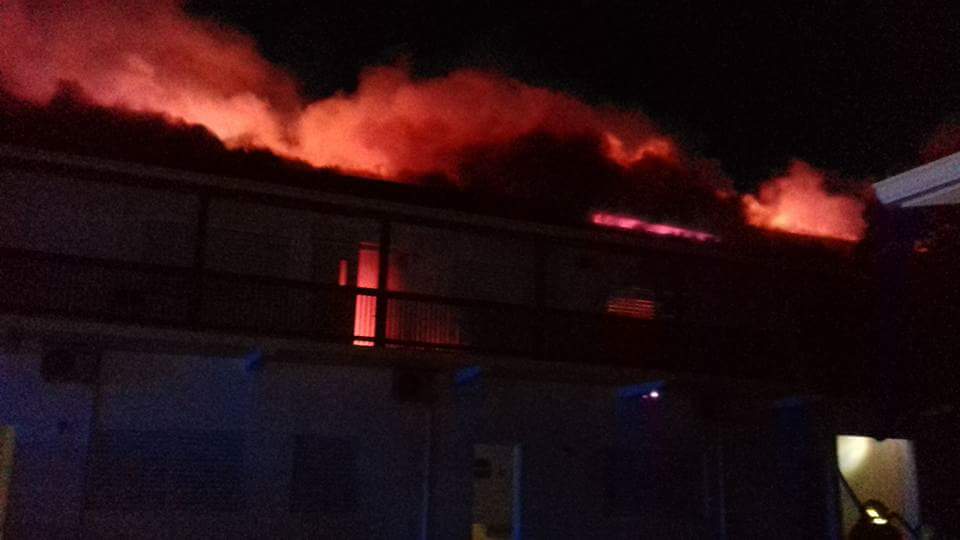 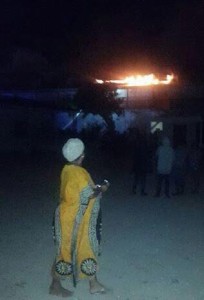 Providenciales, 29 Jan 2016 – Magnetic Media has confirmed that there is strong suspicion, even evidence that the fire which has gobbled up the top floor of the new HJ Robinson High school Administration block was arson.

It is said, the fire which reportedly started around 3 am began in the Prinicipal’s office, and that the security camera was smashed.

Right now, the fire is still raging, school is closed and the JAGS McCartney International Airport is closed. The airport is shut down because the airport fire truck is what is on the scene right now, trying to extinguish the fire because there is no domestic fire unit.

The block, which was opened just before the 2015/2016 academic year housed the Principal, Vice Prinicipal’s and records offices – all hard copies of the students’ records are believed destroyed by the fire. Also up there, the library and computer lab – both were just outfitted with thousands in books and computers last week.

We spoke to the Member of Parliament for this area of North Backsalina, Hon Edwin Astwood who said he is heart-broken at the fire and upset that the years and years of requesting a domestic fire unit during House of Assembly budget debates had not been answered.

Astwood also shared that he believes the depleted police force has contributed to this break in and fire.

“I was very disheartened when I got to the scene around 4:30am to see the school burning and knowing that it is alleged to have been set on fire by somebody. I have made numerous requests for a domestic fire unit for Grand Turk; we are always told, ‘it is in the pipeline.”

Astwood told Magnetic Media, in a telephone interview this morning that men from the community helped to move furniture out of the classrooms and that FortisTCI was there too with its cherry picker trucks to help to elevate the airport’s firemen.

This is the second government school to see some destruction due to fire in recent years; the Ona Glinton Primary in Grand Turk was gravely damaged in a blaze which crippled school operations for years; that fire was November 21, 2010.

Up to the time of this report, there was word that due to the ability of someone to save the security system’s DVR recorder, Police have a person of interest in custody.

The event is described by most in touch with Magnetic Media as “sad, sad, sad.”