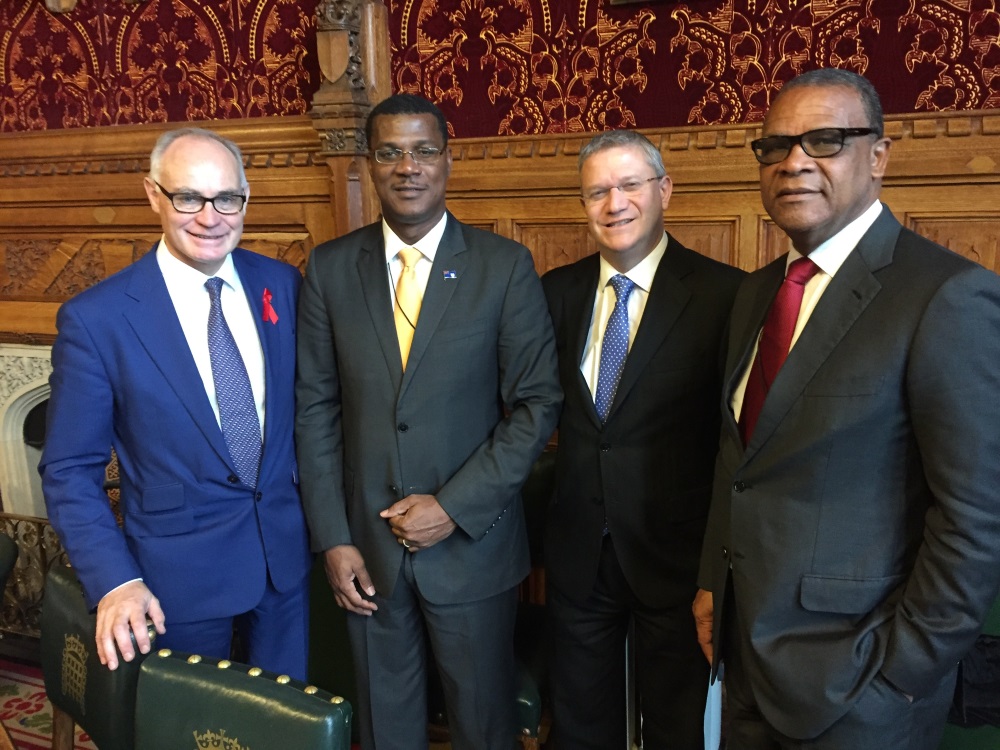 The address was delivered to members of the Foreign Affairs Committee in the presence of other Overseas Territories Leaders, who are gathered in London this week to attend the Joint Ministerial Conference 2015.
The Premier’s address, which was delivered in part (due to time constraints) but later submitted, read:
“Members of the FAC it gives me great pleasures of address you all here this morning on behalf of the British Overseas Territories on the issue of governance.

“Even though each overseas may territory differ greatly from each other in size, population, economy, administrative capacity and level of political maturity, each territory has a right to self determination and self governance based on the settle will of the peoples of each territory and this self determination include the choice to remain a British OT. The British government has the responsibility to ensure that the territories are protected and are provided with a constitutional and governance framework that ensures good governance and supports progressive move towards self governance in whatever form.

“The constitutional construct varies greatly between the overseas territories and the rationalization for such construct seems haphazard and reactionary to circumstance in many instances and not based on the principles of the UK’s responsibility as laid out in the UN Convention and principles of modern democracies and good governance.
“There are many territories who feel strongly that the reserve powers of the governor are too wide in scope and overreaching into the daily executive decisions of the territory. There are many territories who feels that the governor has too much influence in the legislature in addition to veto powers.
“There are many territories who feels that the UK’s persistence as borne in the constitutional construct, to separate politics from governance the territories undermines the ability of locally elected politicians to deliver their political mandate and a shift in decision making powers to the FCO.
“There are many overseas territories who are concerned about not only the reserve powers of their governor but also the method and criteria used for the selection of their governor as this impacts heavily not only on the style of governance but the extent of interference of the governor outside of their constitutional remit.
“Ladies and gentleman I have spoken broadly on governance arrangements and concerns that you may find across the OTs, so I now turn my attention specifically to the Turks and Caicos Islands to highlight such governance concerns.
“The Turks and Caicos Islands as a UK Overseas Territory was administered via its own Governor since 1972 after the Bahamas went independent and in 1976 gain its own constitution that permitted elected ministerial system of governance.

“The Turks and Caicos Islands has had its constitution suspended twice for allegations of maladministration and corruption as was discovered in two commissions of inquiries. There are many including myself who still question the need for suspension of the constitution as a necessity to intervene and correct and weakness in governance as whatever failures there were did not have its origin in the constitution. The elected government of the TCI believe in and embraces the good governance bodies that have been implemented prior to and during the direct rule from the UK, but we are of the view that there are many provisions within the new TCI constitution when combined with the mandates of the good governance institutions stiffles the ability of any elected goverment to govern effectively.
“Governance in the Turks and Caicos Islands is even further controlled by the UK via the new role of a Chief Financial Officer who has decision making and veto powers as it relates to financial management as a condition of the U.K. loan guarantee which will expire in February of this year. The financial legislative framework in the Turks and Caicos outside of the provisions for a CFO has many provisions for safeguarding and ensuring sound financial management and we as an elected government are sufficiently confident that with these systems in place there would be no need for a CFO beyond the timeframe specified.

“There are many concerns related to the current Turks and Caicos Islands Constitution and these concerns were well articulated in the recent report on the TCI Constitution and the subsequent House of Assembly recommendations for constitutional amendments which were submitted to the FCO. In the new year we will be addressing these concerns and other governance issues with a bipartisan team interfacing with the FCO and this FAC so as to improve and strengthen the relationship between the TCI and the U.K. Government with respect to governance in the best interest of the people of the Turks and Caicos Islands.

“Mr. Chair on behalf of the Overseas Territories I thank you for this opportunity to address this body today on these issues of governance.”

The meeting with the Foreign Affairs Committee was the first of several to be held with the Overseas Territories Leaders and key UK Government Committees and officials, including the Plenary Sessions of the Joint Ministerial Council, which also began yesterday, December 1st at Lancaster House in London.
Premier Ewing is scheduled to deliver another address at the JMC later today at the Plenary Session on the Challenges Facing Small Island Economies.