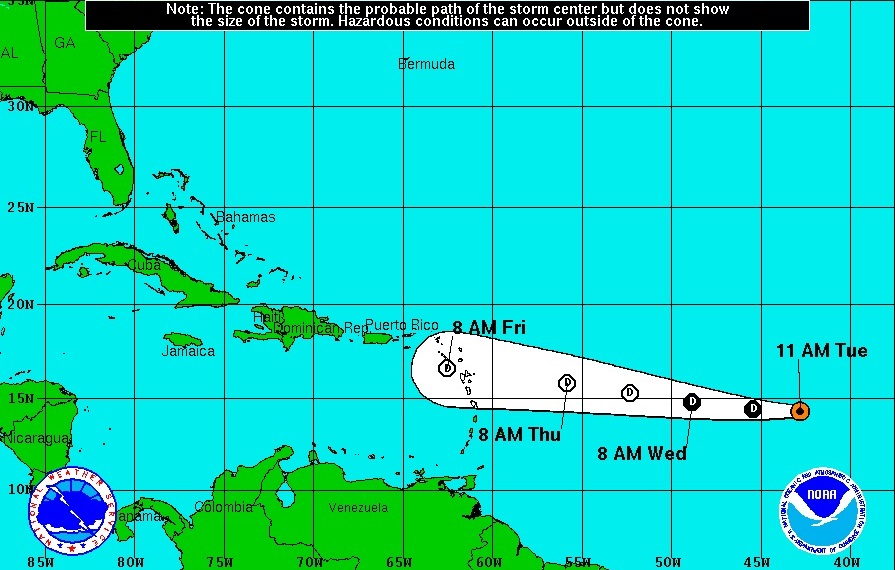 Providenciales, 08 Sept 2015 – Finally in news an update on Grace, now considered a Tropical Depression…that will weaken as she heads for the Lesser Antilles. That is what weather experts are predicting as the storm continues moving west over the Atlantic at 18 miles per hour…packing winds up to 45 miles per hour.

Elsewhere, there are two areas of disturbance over the Atlantic. A weak area of low pressure is located over the Northeastern Gulf of Mexico, that’s about 70 miles Southwest of Cedar Key, Florida. That system is producing disorganized showers and thunderstorms. This system has a near, 0% chance of formation over the next 48 hours. Also, a concentrated area of cloudiness and showers has developed over the central Atlantic about 250 miles east-southeast of Bermuda. This system has a low, 10% chance of formation.

Though we have seen the formation of several storms, one after the other in recent weeks, forecasters maintain that this is a below average Hurricane season. Still, local emergency officials remind residents to be prepared, this as the country marked the seventh year anniversary of the passing of Hurricane Ike on Sunday September 6th.