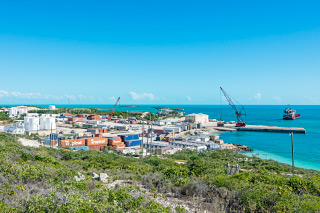 Providenciales, 24 Jun 2015 – As some residents speculate strongly that guns may be coming in through our legal import/export docks; we look back on the move by the country’s port managers to better secure the shipping process.

The Ports Authority was since January given the green light by Government to go to tender so that container scanners could be introduced at all seaports – they want to be able to check containers coming in and containers going out for security purposes.

In September 2014, a proposal was made at Cabinet and based on Cabinet minutes, the idea was widely supported then and again in January at the first sitting of Ministers and the Governor for the year.

The Governor’s Office explained that Cabinet welcomed the proposal and agreed that the Ports Authority should put the work out to tender. The Ports Authority is currently working toward a multi-million dollar dredging and upgrade for at least three of the country’s docks namely Grand Turk, South Caicos and South Dock in Provo.

It is estimated the enhancements to the docks will take $40 to $50 million dollars with the hopes that work would begin later this year.

As for the job for the containerized scanners, we could find no trace of a tender.