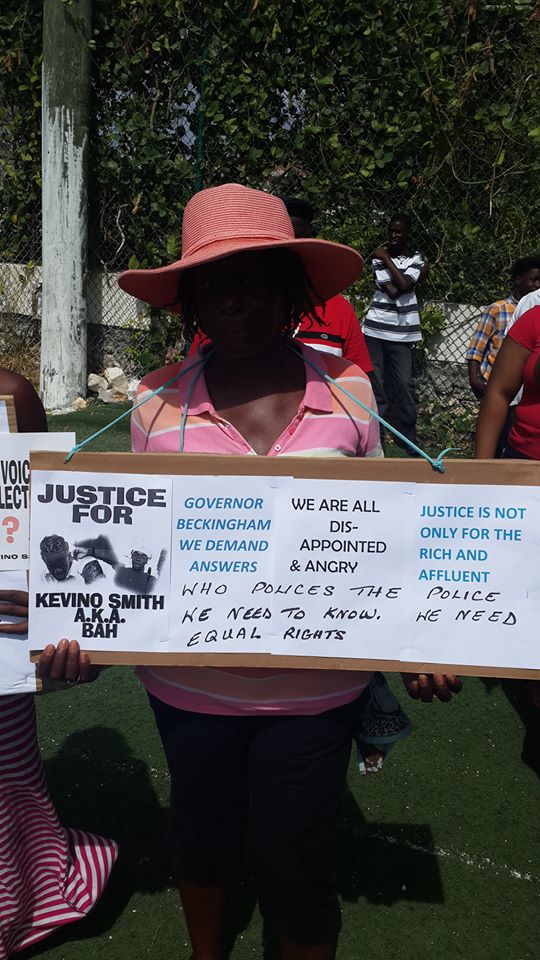 Providenciales, 16 Jun 2015 – The Governor, HE Peter Beckingham did not speak to the family and friends who were protesting yesterday at the parade grounds during the Queen’s Birthday Parade, but Magnetic Media is told that some members of the elected Government did. The group is protesting in hopes of getting some concrete feedback from Police in the slow going investigation of missing, 25-year old, Kevino Smith.

During the Queen’s Birthday Parade, placard toting residents turned out stern faced and demanding what they call, ‘justice’ for the Grand Turk man who was reported gone since March 4, 2015… today actually marked two months since remains were found in Grand Turk.

Those remains have yet to be identified, though there is strong views and intimation that they could be young Smith. Kevino, or Bah’s mother, Patty Smith said the protesting will continue on Thursday outside the halls of parliament. It was constant reference to the case, led in large part by Grand Turk South Member, Hon Edwin Astwood that drew comments in the House of Assembly and seemed to lead to more intense focus on the missing persons’ case by Police.

Smith, was at one time reported to media as a wanted man for his alleged involvement in a reported domestic dispute in Breezy Brae.

Those remains were found in Breezy Brae. Police in April confirmed that Kevino Smith was the only person on record as missing in Grand Turk.