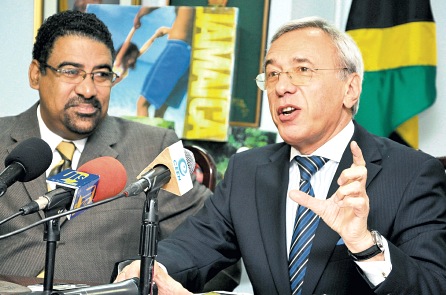 MONTEGO BAY, June 7(JIS) – Jamaica has secured additional airline seats out of Europe that will lead to the commencement of flights during November, in time for the start of the 2015/16 Winter Tourist Season, and extending into the summer of next year.
Tourism and Entertainment Minister, Hon. Dr. Wykeham McNeill, says starting November 19, 2015, Thomas Cook Nordic Airline and its affiliate Ving Sweden, will commence operating flights from Swedish city, Gothenburg, via Oslo, Norway, to Sangster International Airport, Montego Bay.

“They will operate fortnightly, bringing 2,907 passengers, all staying for 14 nights,” the Minister said, while addressing the Jamaica Hotel and Tourist Association’s (JHTA) 54th annual general meeting and convention, at the Hilton Rose Hall Resort and Spa, in Montego Bay, on Saturday, June 6.

Dr. McNeill also announced that another Swedish airline, Fritidsresor (TUI Sweden), will commence weekly flights between that country’s capital, Stockholm, and the Sangster Airport, beginning in mid-December.
This schedule, he informed, is an improvement over the fortnightly service which the airline offered during the 2014/15 Winter Season, and is expected to increase the number of visitors from that region, this year, from 2,604 to 3,783.

The Minister said this service is also expected to facilitate the arrival of an overall 8, 671 visitors for this year’s winter season, incorporating travelers from Copenhagen, Denmark, and Helsinki, Finland, up from 5,510 passengers in 2014.

He indicated that these tourists are expected to come for fortnightly stays, resulting in an extra 22,127 room nights.

This, according to the Minister, will bring 15,132 additional passengers to Jamaica, with an average stay of 12 nights, equating to an estimated 90,000 room nights.

Dr. McNeill further announced that additional airlift seats have also been secured for 2016, out of Ireland.
He advised that European conglomerate, TUI Group, will be introducing a new direct charter flight from the capital, Dublin, to Montego Bay, for the 2016 Summer.

This, the Minister outlined, is being facilitated through TUI Group subsidiaries, Falcon Holidays and Thomson Holidays.

He said the service to Montego Bay will commence on June 12, 2016, with six weekly flights.
All holiday packages, he further outlined, will be for two weeks, amounting to 12, 222 additional room nights for Jamaica.

The official roll-out of the service is slated for June 17, 2015.
“We have TUI’s assurance that, should this short programme be successful, they will consider expanding into the following (2017) summer,” Dr McNeill added.