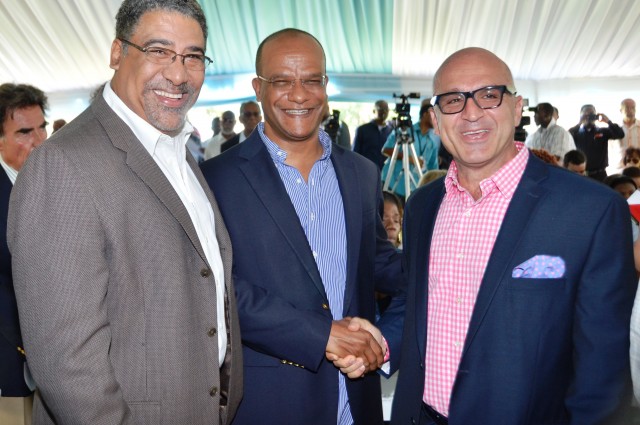 MONTEGO BAY, April 25 (JIS): Tourism and Entertainment Minister, Hon. Dr. Wykeham McNeill, has welcomed the entry into the Jamaica’s tourism market, the largest Spanish hotel chain, Melia Hotels and Resorts.
The company has signed a 15-year lease agreement with the Government, through the National Insurance Fund, which owns the property, to manage the former Braco Village Resort in Trelawny.

It will be known as the Melia Braco Village when it reopens in December of this year.
Speaking at a groundbreaking event for the launch of the resort at Braco on Friday April 24, Minister McNeill said Melia’s entry into the island is a show of confidence in Jamaica and in Brand Jamaica.
He further stated that Melia is entering Jamaica when the tourism sector is on a high, with hotels reporting very good occupancies.

“At this point in time, tourism in Jamaica is very positive. Arrivals are up, the hotels are full, and the airports are bursting at the seams. When your occupancies are up, it drives demand and when you drive demand, you drive investments and we are now seeing the fruits of that investment,” Dr. McNeill said.

The investment of Melia into Braco Village includes refurbishing of the existing 225 rooms and other buildings as well as the addition of 250 new rooms, bringing the room count to 475.

Some 400 permanent jobs will be created at the resort when it is completed, while between 200 and 300 will be available during the refurbishing and construction stages.
The Tourism Minister pointed out that Melia’s investment forms part of $54 billion worth of investment in Jamaica’s tourism sector over the past three years.

“The investments that we have on the books now will see the addition of another 1,600 new rooms to Jamaica over the next 18 months and a number of those rooms are right here in Trelawny…and this investment is important because it creates jobs,” Minister McNeill opined.

Meanwhile, Minister McNeill congratulated the Ministry of Local Government and Community Development on the work done in clearing most of the hurdles at the local authority for the investment by Melia Resort to take place.

He also stated that the Ministry of National Security, through the Passport, Immigration and Citizenship Agency (PICA), has done a tremendous job in ensuring that immigration issues are addressed at the island’s airports, especially at the Sangster International.

“We are getting 4,000 to 5,000 people coming in a four to five-hour period and they (PICA) have worked with us in doing away with outgoing immigration, with putting in kiosks, with getting up to 34 Immigration Officers…we still have a lot more to do, but it is the collaboration of these Ministries that is really helping us in the tourism industry,” Minister McNeill said.

The Melia is one of the largest Spanish hotel companies in the world. This world- renowned hotel has 350 franchises in over four continents.

Cat Island to honour one of its native sons