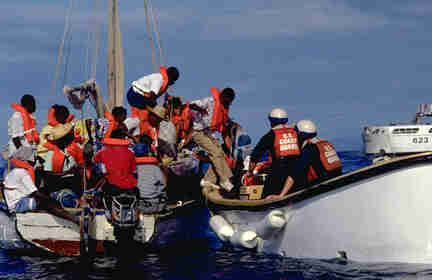 Providenciales, 13 Apr 2015 – More Haitians are expected to be found dead after a boat load of them, said to be TCI-bound sank on Friday. Some 21 bodies washed ashore in the North of Haiti, which is home to that nation’s second city – Cape Haitian. The US Coast Guard says many as 40 are feared dead. There was reportedly an attempt to return to shore in Haiti when the boat encountered rough seas; the boat ran aground on a reef and went down. Gulf News of the Americas is reporting that: “In the past six months, the US Coast Guard said it has intercepted 309 Haitians at sea. That is a much lower rate than the previous 12-month period, when 1,103 Haitians were rescued, according to the Coast Guard.”