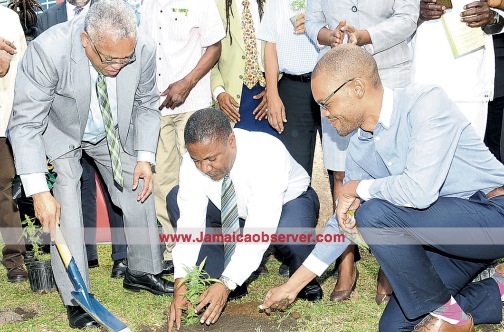 Jamaica, 20 Apr 2015 – THE University of the West Indies (UWI), Mona, planted its first legal ganja (marijuana) plant yesterday, symbolising its position as the pioneer in legally cultivating and researching the benefits of the drug in Jamaica.

Emotive adjectives coloured the presentations from government and university officials at the function marking the event, at the Agora Gardens, Faculty of Medical Sciences Teaching and Research Complex.
Minister of Science, Technology, Energy, and Mining Phillip Paulwell suggested that it was “a wonderful day”, while UWI principal, Professor Archibald McDonald, pronounced it a “historic and amazing day”.
“If we can play our cards right, good things can happen for the people of Jamaica,” Minister of Justice, Senator Mark Golding, who piloted the Bill in the Senate decriminalising the drug, commented.
Under the provisions of a ministerial order issued by Paulwell recently, under the Dangerous Drugs Act, the UWI, Mona, as well as the University of Technology, Jamaica (UTech) are now licensed to grow ganja for research purposes.

Yesterday’s event was to witness the planting of the first legal ganja plant on the UWI campus.
Paulwell explained that he issued the order under Section 7 (d) of the Dangerous Drugs (Amendment) Act, which was passed by Parliament in February.

He said that the order was “absolutely critical” if Jamaica is to be cited as the place for medicinal research and development of the product.

“We now have an opportunity to catch up (and) I want Jamaica to be the centre of excellence for research in medicinal ganja,” Paulwell said.

He stated that the order will also allow the university to contract farming of the weed outside of the Mona campus, but suggested that, when that is done, the university should pay particular attention to the small farmers.
He said that the law also allows him to grant authorisation to other bodies. However, he warned those interested in the commercial aspects of the drug to start by looking at their own research and development capabilities, and the opportunities being created at the university for research and development.

Professor McDonald, noting that the UWI has recently assumed pole position among tertiary institutions in the Caribbean, thanked the Government and the parliament for making the ganja experiment possible.
“Almost two years ago this was the most conservative institution in the Caribbean, and today here we are planting the first legal ganja plant after 102 years,” McDonald said.

He said that ganja had been demonised for economic reasons, and alcohol and cigarettes were never so demonised because they originated in the northern countries.

“Ganja originated from countries in the south, therefore, it was important that the interests of alcohol and cigarettes were protected,” he said.

He said that the UWI will now do the necessary research aimed at providing the scientific basis to show that ganja is a medicine, and is effective against a range of diseases.

Senator Golding, meanwhile, reiterated that the interest of the Rastafarian community would be protected.
He said that there were three areas to protect their interest: (1) entitlement to certain lands designated for cultivation for sacramental purposes; (2) places of worship to be designated as such for the use of ganja as a sacrament; (3) and events primarily for observing the faith to be exempted from the Act.
Golding also said that he will also be setting up an advisory group to give guidance on how the permits are to be issued.