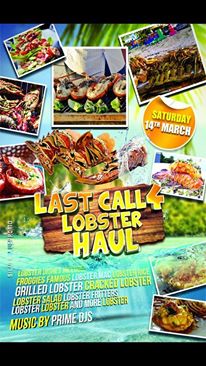 Providenciales, 13 Mar 2015 – Lobster season close out date may be changed according to some reports reaching Magnetic Media; but that will not stop the show at Froggies on Da Beach in Wheeland. We caught up with Froggie today, who shared what residents could expect at the Last Call for Lobster Haul tomorrow from 1pm.
“Well tomorrow we’re gonna do our usual, you know how we do it at Froggies, lobster mac n cheese, Lobster rice, grilled lobster, cracked lobster, lobster everything… coming on down and enjoy it.”

This year, Froggie has decided to add a trivia element…

“The trivia is gonna be ‘when was the first Last Call for Lobster Haul held at Froggies on the Beach; winner gets lunch for two.”

First person to get to Froggies tomorrow after 1pm with the correct answer will get the prize; a lobster meal for two. Entertainment will be live as well.

“Starting at 1pm we got Prime DJs, then around about 8 o’clock we got Lee & the Force, the Island Boys; they gonna be playing as well so come on down and enjoy.”

Again the question is when was the first Last Call for Lobster Haul held at Froggies?