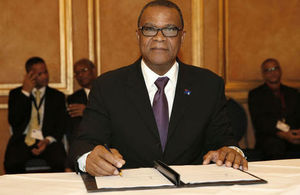 Providenciales, 02 March 2015 – The UK has approved the PNP Administration’s budget; which is revealed as being 9% more or $224.7 million with the biggest hike in government spending going to the Ministry of Infrastructure, Housing and Planning which will reportedly get 32.7% more money. This is more great fiscal news from the Rufus Ewing led administration as it seeks to deliver on some stalled projects including completion of the Caicos Causeway, upgrade on sporting facilities, a quarter of a million for the TCI Community College and completion of a juvenile detention center.

The report released today shares that government even has forecast another surplus of $13.4 million for the 2015/2016 fiscal year. We also read in the release that the new budget will offer a 50% reduction in the cost of business licenses; the removal of the 7.5% Freight Insurance Tax which is applied to nearly all landed goods, an additional four staff to expedite the speedier processing of work permits, a boost to the scholarship fund of $1 million for islanders and $250,000 for Civil Servants to earn professional qualifications.