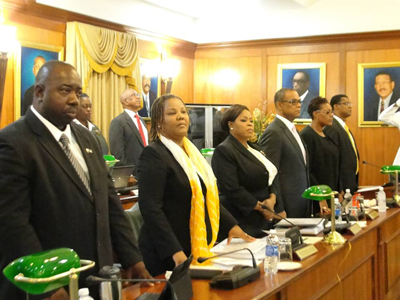 Providenciales, 06 Mar 2015 – The House of Assembly in an all-day debate, but not before parliament was officially reopened with the Speech from the Throne which was delivered by the Queen’s representative in the islands, His Excellency, Governor Peter Beckingham. The speech which is prepared by the governing party and more specifically is coming from the Premier is an overview of intentions for this new legislative period. The Rufus Ewing led administration explained that next year being an election year has nothing to do with the plan to now rapidly complete PNP Manifesto promises.

“Mr. Speaker, the creation of jobs through public and private sector infrastructure development projects, creation of an Invest Turks and Caicos Agency with an SME programme facilitating the development of local businesses, the continued reduction in the taxation burden and the increase in minimum wage are all strategic policies, to which we are committed, that will ensure economic growth and development and the empowerment of Turks and Caicos Islanders.”
No accident, that tourism in 2014 grew by 24% or 400,000 guests for the calendar year and the government says it will make the public sector work environment more equitable for Islanders and will spend $9 million on pay increases for the sector. The Investment Unit is also announced to create policies and programs to support Small and Medium size businesses and the PNP Administration says the people ought to expect a strong effort to ensure country is getting value for money with the TCI hospitals contract. Other key areas of focus during the Speech from the Throne: development in education and the promise to have enough seats for students; more scholarships so islanders can have at least a first year degree and public sector training.