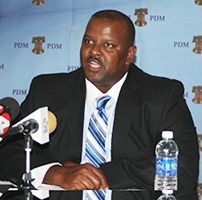 Providenciales, 17 Dec 2014 – The Premier is not being proactive enough about the so called, ‘sluggish processing’of the Crown Land Unit application of the resort development project touted for Five Cays. It was during the PDM Party’s mid-term report card press Conference, that shadow minister for business in the Opposition Party and Member for Five Cays, Hon Sean Astwood explained the problems and the TC Weekly news quotes him saying: “I do know that government departments that have responsibility of facilitating this development need to get their act together.” As for what the Member feels is at stake here, everything.

“I am afraid that if that doesn’t happen soon the developers might look somewhere else to do their project.” Cabinet has already approved and bragged about the development; five months later the eco-adventure, low density, spa resort project remains in limbo because of bureaucracy.