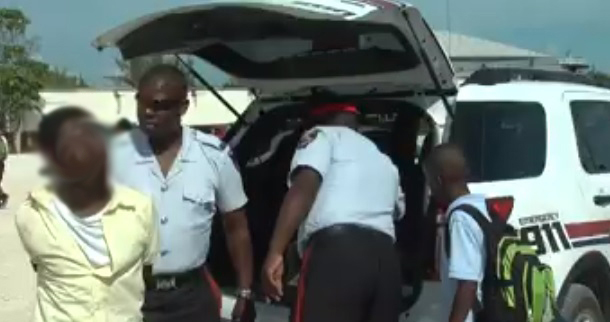 At approximately 2:40PM (Tuesday 30 September 2014), police attached at the said school received information that a male who is not a student of that school allegedly trespassed on school property. Police and security officers approached the said male and he began to run away. A police Sargent gave chase and upoun catching up with the male, the officer arrested him on suspicion of Trespass.

While taking the said male back to the school, it is alledged that the Sargent was punched several times to his head, which resulted in a wound above his left eye. Officers nearby on patrol assisted the Sargent and subdued the male. The teen was arrested for Wounding, Malicious Damage to Property, Trespass and Resisting Arrest. He was taken to Chalk Sound Police Station and remains in police custody pending further investigations.

The injured male officer was taken to Cheshire Hall Medical Centre for treatment of a head injury and later released.

About 3:05PM, while officers were still on scene, it was observed by at least one of the officers that a fifteen year old student of the said school in Blue Hills was throwing stones at a marked police vehicle. Officers observed that the said vehicle had a dent on the front right door frame. The accused was then arrested on suspicion of Malicious Damage to Property and Throwing missiles. He was taken to Chalk Sound Police Station and later given police bail to return on a later date while investigations continue.