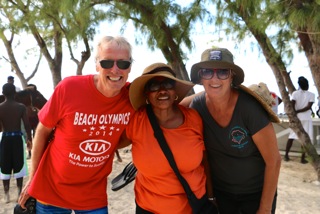 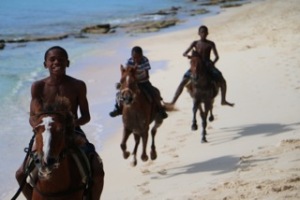 Turks & Caicos Islands, 14 Oct 2014 (TCIG Press Release)- Organizers of the 10th Annual Commonwealth Games Beach Olympics were not disappointed this weekend as their event saw hundreds of children accompanied by their parents gathered at Governor’s Beach for a day of fun, sports and competition. There was not a dull moment as various sports were going on at one time or another.

We saw the swimming competition taking off with children of all ages, some came to just learn how to swim. The Facilitators from Ocean Academy and Big Blue out of Providenciales truly worked the Swimmers that they never wanted to leave the water.

It was a sight to behold as the Beach came alive with action, excitement, and colour as the 4 zones showed up in their zoning colors: Red, Orange, Green and Purple or just anything colourful. Everyone came out to represent and ensure their Zone would walk away with the winning Trophy and title of Best Sporting Zone in Grand Turk.
There were various sports being played: Volleyball, Rugby, Swimming, Horse Back Riding, Cultural Games, Weightlifting and a new sport was also introduced, Boules that showed adults and children taking great interest in.
However, at the end of the day once the points were tallied in all sports, it was South Back Salina, the Orange Team that came out as the Best Sporting Zone in Grand Turk. In the Volleyball Competition it was the Turks and Caicos Community College walking away with the Trophy and cash prize. The Strong Woman Contest went to Rose-Anna Henry, and the Strong Man went to Ronald Parker. The Horse Race was won by Josh Smith whilst many other children won in their sports with medals and prizes.

The President of the CGA, said she was very pleased with the outcome and thanked all those companies that partnered with the CGA, comprising of Kia Motors for sponsoring the T-Shirts, Chloe and Ben of Big Blue and Greg Doolittle of Ocean Academy out of Providenciales for giving of their time and working with the swimmers so diligently, Grand Turk Liquors, Palm Grove Variety Store, Rosa’s Variety Store, Walter Gardiner, Wally’s Restaurant, Cee’s Food Store, Do It Center, Jack Shack and Bohio Resort. Thanks also to the Zone Leaders and volunteers for taking time out of their busy schedule and assisting with this event. It is remarkable that we can give of our time to ensure that our Youths are being empowered through sports and healthy living.