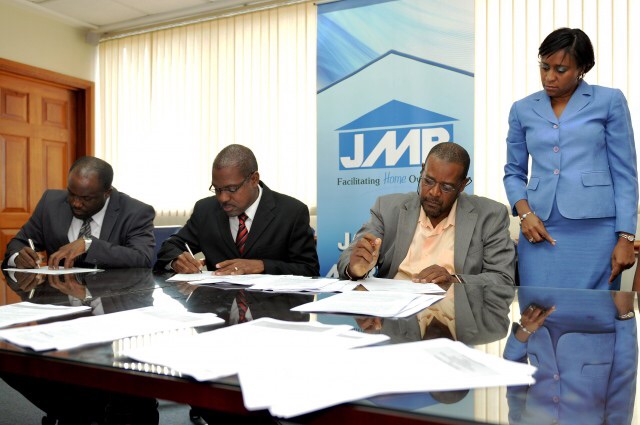 Kingston, 19 Sept 2014 (Jamaica Information Service) – ​The Jamaica Mortgage Bank (JMB) is the lead financier for the first phase of a major housing project on the Mona campus of the University of the West Indies (UWI), which will provide accommodation for 1,584 students over the next three years.

Ground was broken on Thursday (September 18) for the development, which is being undertaken at a cost of $4 billion.

Under phase one of the project, 576 units will be constructed at a cost of $1.35 billion for delivery by August 2015.

The JMB and National Commercial Bank have signed a syndicated loan agreement with 138 Student Living Jamaica Ltd, the developers and proposed operator of the new residences, for the first phase, with JMB taking on the role of lead bank.

A syndicated loan is one that is offered by a group of lenders (called a syndicate) who work together to provide funds for a single borrower.

General Manager of JMB, Courtney Wynter, said the project can contribute to economic progress through investment in education, and housing development and construction, which are key drivers of growth.

“Our analysis shows that for every $250 million that is spent by the housing sector the Government benefits by earning about $103 million, which is just about 40 per cent”, he noted.

Mr. Wynter pointed out that the public-private partnership for student accommodation is the first of its kind in Jamaica.

“The JMB is excited to be leading this innovative approach to financing. The project will have a tremendous impact on education and training as it supports the university’s strategic drive to increase enrolment, particularly in the areas of medicine, law and engineering,” he added.

The housing development involves the construction of 11 six-storey buildings and will be configured to allow access for the disabled.

Gaming and Crime Bill Pass in the House