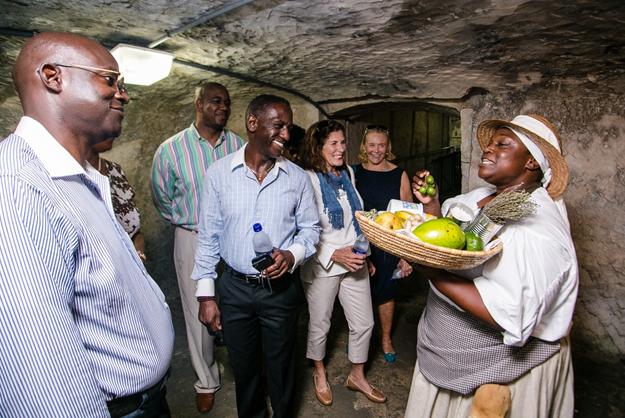 Raquel Davis is selling her wares like her great-grandmother did 100 years before her –from a straw basket made from Andros plait, lifting, gently turning, holding out each sugar apple, soursop and fresh pear for the ‘buyer’ to examine. Eyes brimming with pride for the produce she grew, she is dressed in period costume from the straw hat on her head to the long skirt made of rough-hewn cotton, maybe a potato sack.
Nearby, Shenique is telling the story of Fort Charlotte, built in 1787 to protect Nassau against an attack by the French which never materialized. Meantime, Veronica is welcoming the latest group of visitors to the country’s largest fortress. “Welcome to Fort Charlotte,” her voice bellows, “where the history will intrigue you, the structure will amaze you and the view will inspire you.”
The three women are posted at one of Nassau’s oldest sites, Fort Charlotte, rapidly becoming one of the city’s fastest growing attractions. They’re among a troupe that is giving the hilltop fort new life with guides in period costume bringing living history to hundreds flocking back to the fort by the bus and taxi-load, thanks to support from the Historic Bahamas Foundation Council.
“This is truly living history and it’s fascinating — every sentence packed with intrigue and insight,” said Council Chairman Owen Bethel. “When AMMC (Antiquities, Monuments and Museums Corporation) came to us to request the funds for the costuming, we immediately recognized the potential and it was a unanimous yes, but seeing it in action reinforces what a great asset it is for us to be able to tell the remarkable story.”
Bethel toured the fort with Council members, businesswoman and philanthropist Nancy Kelly, attorney and former jurist Yvette McCartney, Albany Vice President Dr. Tyrone McKenzie, public relations executive Diane Phillips andNew Providence Development Company President Philip Simon.
“This is really interesting,” said Kelly. “I never realized there was a well here or what it took to build this, or that 40 men slept crowded in the small stone dungeon.”
AMMC Executive Director Dr. Keith Tinker had proposed the period costuming along with the firing of the cannon at noon on Wednesday and Friday as part of a broader business plan to bring new life and activity to historic sites while preserving their integrity.
As guards dressed in military uniform prepared for the firing of the cannon, visitors and Council members got a quick history lesson. The original cannons at all three forts on the site were so valuable because of their bronze England shipped them back and between 1844 and 1859 replaced them with steel. One loud Ka-boom accompanied by plumes of white smoke proved the old cannons still worked, but Fort visitors were told, “These cannons have only been fired in celebration, never fired in any anger.” 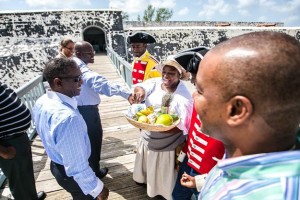 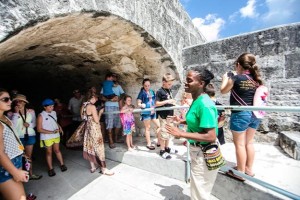 New International School of the Turks and Caicos Islands Unveiling