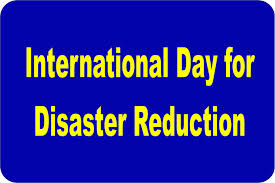 TURKS AND CAICOS ISLANDS, OCTOBER 8, 2013- On October 13, 2013, the Department of Disaster Management and Emergencies (DDME) leads several activities as the Turks and Caicos Islands (TCI) joins the rest of the world in celebrating International Day for Disaster Reduction (IDDR).

This year’s theme Living with Disasters and Disability focuses on the one billion people around the world, who live with some form of disability. “Persons living with disabilities are among the most excluded in society and their plight is magnified when a disaster strikes. Not only are they less likely to receive the aid they need during a humanitarian crisis, they are also less likely to recover in the long term more often than not, their unique contribution to helping communities prepare for and respond to disasters is also often overlook,’ a UN statement said.

The theme also aims to emphasis the unique way in which persons living with disabilities contribute to helping communities prepare for and respond to disasters, and how this is often overlooked.

It is against this background that the DDME has partnered with the Ministry of Health to increase awareness of the wider public to get involve and take ownership of the process in order to create disaster resilience in local communities.

The advantages of IDDR theme here in the TCI will draw attention to the needs of the disabled communities and allow stakeholders to seek alternatives for the effective management of Disaster Risk Reduction Strategies for those less abled members of society.

The following activities have been planned in observance of the day:

· Messages in recognition of the day senior members of Government.

· Participation of Public and Private High Schools throughout the island in a National Oratorical Presentation. Trophies will be presented to the winning schools.

· Participated in the Disability and Disaster Survey for IDDR day which closed on 25th September 2013.

In a release issued on 2nd October 2013, the UNISDR noted that more than 5000 responses to the survey had been received. Due to the high level of interest and response to the survey, the Agency said it has had to extend the original deadline from 25th September 2013 to the end of the year. The preliminary findings will be announced on 10th October 2013.

Premier and Opposition Leader confirms attendance for swearing in of Beckingham