#TurksandCaicos, September 18, 2022 – “Imagine a world where the largest African export to the Caribbean is no longer slaves.”

Under these words and in an effort to promote increased trade and strengthen relationships between the private sectors in Africa and the Caribbean the first ever AfriCaribbean trade and investment forum was held  in Bridgetown, Barbados from September 1st to 3rd.

Spearheaded by the African Export-Import Bank (Afreximbank), Export Barbados (BIDC) and Invest Barbados the event brought together between 750 to 1000 delegates, investors, bankers and other stakeholders from across Africa and the Caribbean under the theme, ‘One People. One Destiny. Uniting and Reimagining Our Future’. 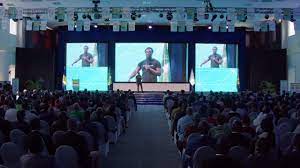 “You can bind the hands and feet of men and women but you cannot bind their hearts” he said.   Chukwumerije’s bone chilling poem was a perfect opener for the linkages based event.

“The bones that connect us all to the continent can never be broken—we are one people scarred by one trauma nailed to one cross followed by one stigma and our voices will not be heard until we project them together.”

On the opening day the President of the Board of Directors of Afreximbank Professor Benedict Oramah introduced the event and what it aimed to do.

“Trade can be used for good or evil— We would be stupid not to recognize that Africa’s borders have been extended to the Caribbean. We would have ourselves to blame it for you failed to realize that we are the same people and therefore can constitute one integrated market.” he said.

Bajan Prime Minister Mia Mottley in giving the keynote address said, “We have come here cognizant that our people have worked together for over a century in the various Pan African conferences, political cooperation, though essential, is not sufficient for the journey that must be made to reverse the underdevelopment of Africa and the Caribbean.”

Highlighting the current common battles that the two regions face including COVID,  inflation and debt Mottley vowed, “We the children of independence have determined that we shall not allow another generation to pass without bringing together that which should never have been torn asunder.”

She maintained that despite hardship we must take our destiny into our own hands now as one people working together.

Mottley insisted that our destiny to be great nations was within our grasp if only we would take it.

“We have the collective brainpower, creativity and the innate discipline and the capital to make that difference now.” she said. 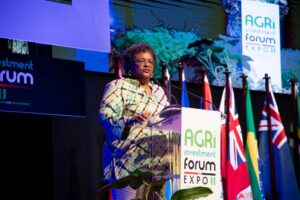 Over the course of the three day event several panel discussions will be presented geared towards partnership in: