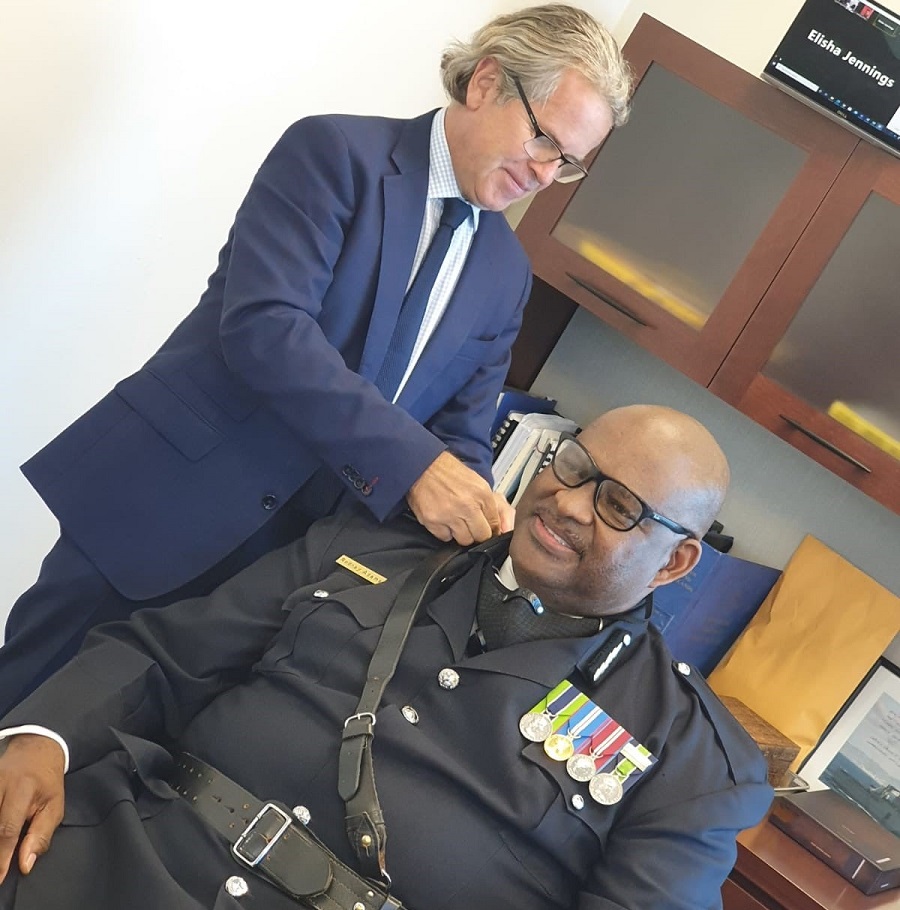 #TurksandCaicos, June 10, 2021 – Rodney Adams has been officially appointed to the post of Deputy Commissioner of Police; he has served 35 years on the Force and after an announcement in a recent press conference led by Police Commissioner Trevor Botting, images of Adams receiving his full credentials from Governor Nigel Dakin have emerged; drawing congratulations for the Grand Turk native.

Commissioner Botting said the Deputy post took effect since April 1, DCP Adams was sworn in on May 28th and that as acting, complete dedication was shown.

For Turks and Caicos residents, this ascent to second in command role at the Royal Turks and Caicos Islands Police is particularly welcoming.  Residents have over the years voiced that they would like to see a return to an indigenous islander at the helm of policing.

It has been ten years since Edward Hall headed police as its Commissioner.   And that is precisely the goal in mind for the new DCP.  “Although there were many challenges, I remained focused and will continue to do so as I seek to become the next leader of this great organization, said Deputy Commissioner of Police Rodney Adams in a press statement, adding:” I have over the years, encouraged and promoted new concepts into policing that will assist in meeting 21st-century policing demands and I am impressed by the level of dedication and commitment made by officers in this regard.”

Current Police Commissioner, Trevor Botting informed in the media release that official DCP Rodney Adams is skilled at developing progressive crime reduction strategies. He was instrumental in the creation of phase one of the Closed Circuit Television(CCTV) Business case in 2015 that has led to the introduction of CCTV technology to the Turks and Caicos Islands in 2018.

Rodney Adams paid homage to past Commissioners and Deputy Commissioners, saying he was inspired by examples set in former officers like the late Micheal Taylor, a former DCP and former Superintendent, Vernon Alco Williams were named.

Yes, there are vaccine card fraudsters!