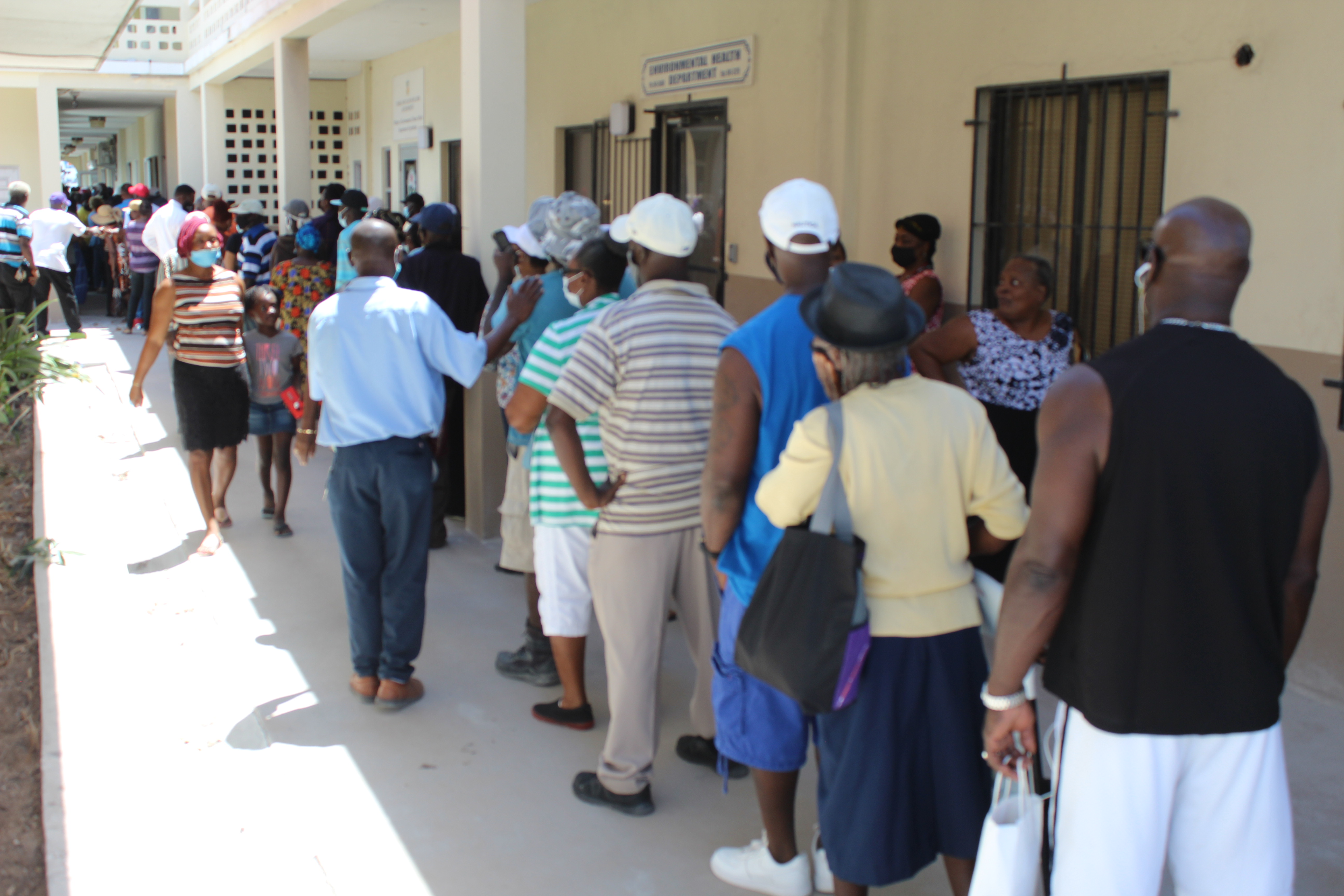 #TurksandCaicos, March 30, 2021 – They had gone back to the drawing board and returned to the public a more organized system of cheque distribution after a frustrating start for the Ministry of Finance on Friday and Saturday.  Though the majority of the 50 to 60 years olds in the first system of cheque dispatch have gotten their one thousand dollars, some walked away empty handed because their cheques were not there or because they were unable to stand the punishing lines.

People were out all day on Saturday again; the line snaking around the building and through the parking lot of the Butterfield square in Providenciales.

It was hot, windy and there were spotty of showers.

The public expressed disappointment at the grueling wait and conditions to which the elderly in particular were exposed.  It seems the Government considered the outcry and returned a plan on Sunday afternoon which not only amends the previous distribution but invites those in the 49 and younger age group to come out for their relief cheques.

There are two locations for collection in Providenciales: the Treasury office for the 50 year olds and older and the Gus Lightbourne Gym for the 49 years and younger.

Cheques will be shared out between 10am and 6pm (Monday to Wednesday) using the first names: A to F on Monday; G to M on Tuesday and N to Z first names will pick up on Wednesday, at both sites.

Thursday will be open to anyone; though closure is earlier (at noon) due to the Easter Holiday weekend.

Approved applicants 50 years and older will collect cheques at the Treasury’s Office in Grand Turk.

South, North and Middle Caicos collections were opened on Monday as well.

In South Caicos, residents are called to the Treasury Office between 9am and 6pm Monday to Wednesday and up to 12 noon on Thursday.

On Monday in South, the older residents are required to appear earlier in the day; distribution for 60 years and over is from 9am to noon. From 12noon to 4pm cheques go to Turks and Caicos citizens and British Overseas Territory Citizens in their 50s.

Tuesday in South Caicos is for people with first names A to K and Wednesday is for the names L to Z.

North Caicos will follow an almost identical pattern.  Cheques began on Monday from 9am to 12noon, for those 60 years and over and from 12 noon to 4pm, those in their 50s were to come to collect.

Tuesday  is for all A to K first names and Wednesday is for individuals who are approved with the first names L to Z.

In this plan, everyone who has been approved for the PNP Government’s Citizen’s Relief funds – which is over 13,000 people – should have their cheques in time for the Easter weekend.