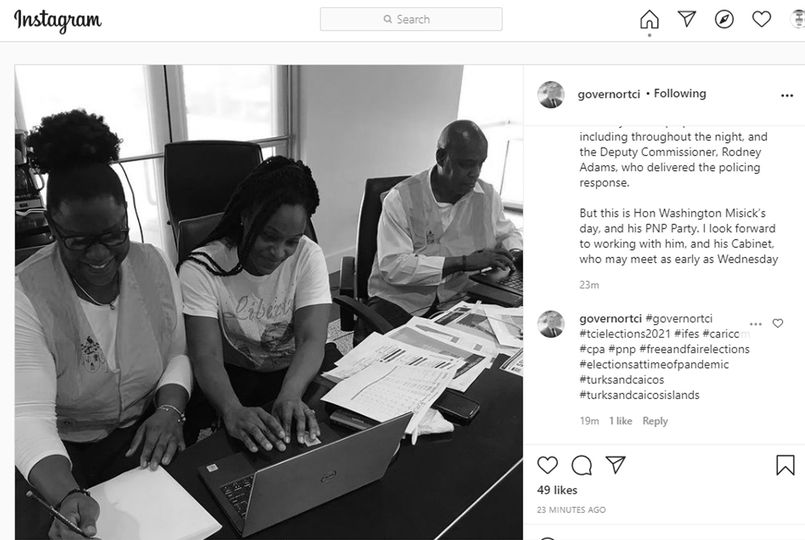 #TurksandCaicos, February 22, 2021 – The Supervisor of Elections has just announced the final result. A landslide victory for the PNP. They will hold 14 of the 15 elected seats in the next House of Assembly. Within that they won 9 of the 10 constituencies and all 5 of the all Island seats.

Given this was at time of great uncertainty, due to the pandemic, the overall turnout at 76% is both encouraging in terms of the process and the confidence the electors had in that COVID generated process and also of course reinforces the next government’s mandate.

The highest turnout was in North and Middle Caicos (86%) and South Caicos (85%).

The lowest in the Providenciales constituencies of Blue Hills (65%) and Cheshire Hall (69%).

I’ve spoken to the leaders of both political parties and the next step is for Hon Charles Washington Misick to write to me telling me he can command a majority in the House of Assembly at which point I will ask him to form a Government. Hon Misick, as the new Premier could be sworn in as early as today, if that is his wish.

Yesterday I thanked all the remarkable election workers and police officers in the field so let me end by saying a huge thank you to the Supervisor of Elections – Mr Dudley Lewis – who has been preparing for this moment for many months and on whose shoulders much pressure rested. He was helped by the team around him of Lavern Reynolds, my Executive Director and his representative in Provo, Mauvette Ingham. The image is the three of them in my conference room after 31 hours of continuous work just before he called RTC to announce the final result.

Also Mr Lewis’s team in Grand Turk were tremendous that included, to aid continuity, my previous Executive Director, James Astwood, Rosetta Talbot and Dr Beatrice Fulford plus Steve Brown, from my office, who managed all the administrative arrangements with the International Observers.

Finally the DG and AG who worked tirelessly on the preparations for this, including throughout the night, and the Deputy Commissioner, Rodney Adams, who delivered the policing response.

But this is Hon Washington Misick’s day, and his PNP Party. I look forward to working with him, and his Cabinet, who may meet as early as Wednesday