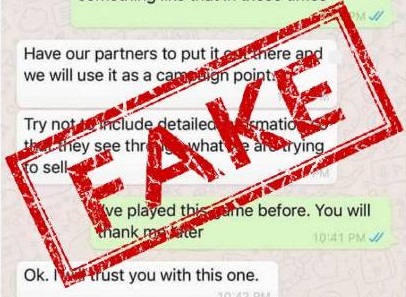 #TurksandCaicos, February 13, 2021 – A screen shot of a conversation about what would be illegal payments and promises of big stimulus money to voters makes the leader of the PNP look as if he is dabbling in dubious even serious criminal behavior in order to win over electors.

But Washington Misick has issued statement to say, the image is “a manufactured message by desperate political operatives” in an attempt to damage his campaign and his party’s bid for government of the Turks and Caicos Islands.

“No such conversation has taken place between me and anyone else, It is a lie,” said C. Washington Misick, PNP Leader and All Island Candidate in the 2021 General Election

The screen shot does appear to be an actual WhatsApp conversation and displays Washington Misick’s true cell phone number and current profile photo.  It also disparages one of the PNP candidates, Shaun Malcolm.

“It has to take a special kind of desperation for anyone or group to go to such depths to malign another person, create mischief and sow discord.  Sadly this is not the first time that certain elements have resorted to lies and malicious actions during an election campaign.”

It is a crime, with grave consequences under the Elections Ordinance to “treat” voters, whether to ham and turkey, back-to-school supplies or cash.

“Every person who corruptly, by himself or by any other person, either before, during or after an election, directly or indirectly, gives or provides or pays, wholly or in part, the expenses of giving or providing any food, drink, entertainment, or provision to or for any person for the purpose of corruptly influencing that person or any other person, to vote or to refrain from voting at such election, or on account of such person or any other person having voted or refrained from voting at such election.

Every voter who corruptly accepts or takes any such food, drink, entertainment or provision.”

Anybody who is found guilty of treating under the Elections Ordinance shall on summary conviction be liable to a fine of $5,000 or to imprisonment for twelve months or to both.

The PDM, though not named in the statement from Washington Misick, were contacted by Magnetic Media.  The party chairman – Douglas Parnell – did not reply, but the Deputy Party leader, Sean Astwood, called the implied accusation:  “foolishness”.