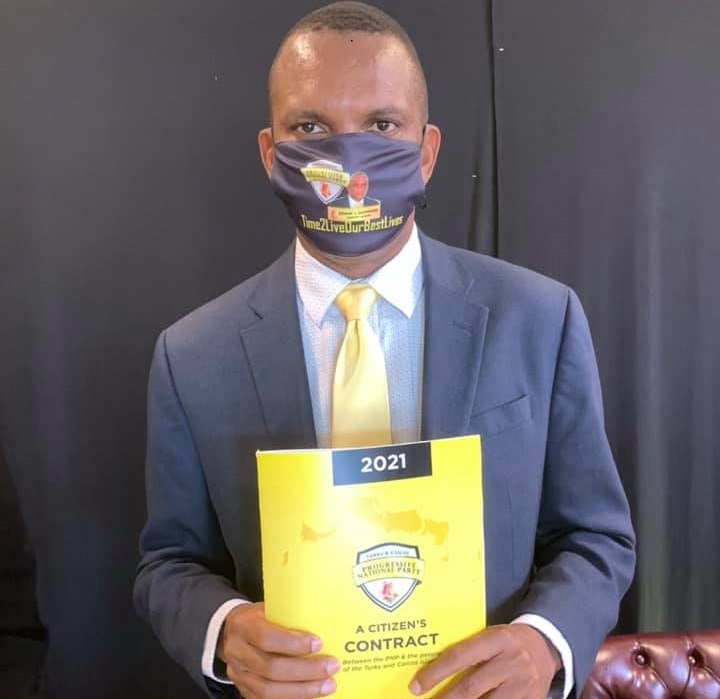 #TurksandCaicosIslands – January 26, 2021 – Government portfolios would be shifted, a strong thrust on e-governance development and economic recovery from the top to the bottom is what the Progressive National Party, of the Turks and Caicos promises as nomination day approaches.

Mr. Saunders presented what the opposition is calling A Citizen’s Contract.  He said the PNP wants to see islanders evolve from being workers only in the hotel sector to owners also… to a workforce which is ready for modern jobs and scholarships to match… food production would be scaled up and ensuring environmental enhancements would be more in depth.

A pressure point for residents is crime.

“We are going to drive down the out of control murder rate. We owe our people that, our people should be able to sleep comfortably at night time and our solemn promise to you is that at the end of our term, you will be sleeping comfortably at nighttime,” explained Saunders during the launch of the Contract on January 19 at the Progress House, the party’s headquarters in Providenciales.

In a unique season; the launch was electronic and so is the document.  A 28-page contract, which offers a plan for greater accountability, poverty alleviation, strengthening support for the elderly and the youth and advancements in infrastructure was rolled out by endorsed candidates in the upcoming General Elections.

Absent was the party’s leader, Hon C. Washington Misick; apologies were given with a promise he would be back in the coming days.

Momentum is also slowed for both political parties, which cannot hold rallies and have to limit contact with voters due to the burst of Covid-19 cases in three islands of the British overseas territory slated for General Elections on February 18.

Still the PNP is optimistic, giving their manifesto the theme:  no Turks and Caicos islander left behind.

“We wanted to be clear to the people our goals and objectives for the next four years.  We wanted to be able to give to people, actually outline our plans and give it to them to show them the things we are going to achieve, not the things we are going to promise and then come back in four years and saying well you know we promised this but we weren’t able to deliver it.  Everything that we’ve laid out in this manifesto is deliverable.”