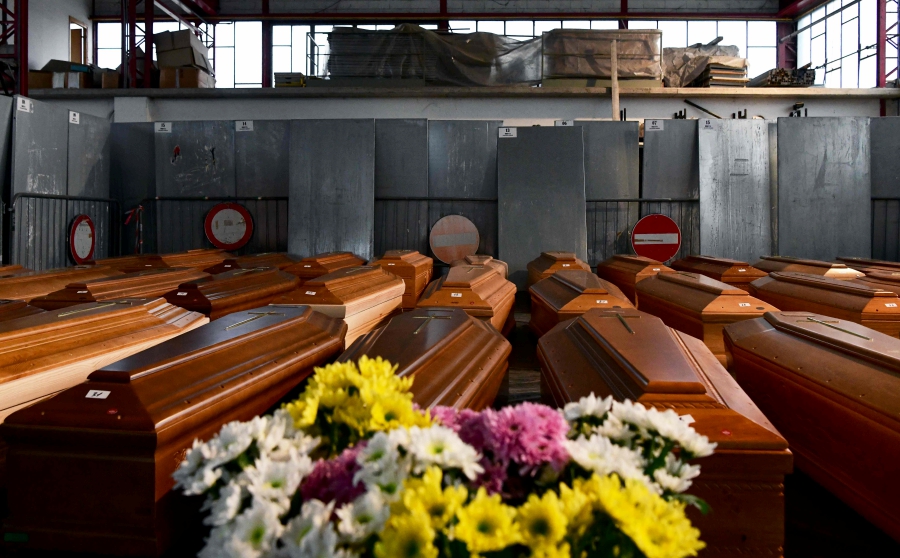 A general view shows some of 35 coffins of deceased people stored in a warehouse in Ponte San Pietro, near Bergamo, Lombardy, on March 26, 2020 prior to be transported in another region to be cremated, during the country's lockdown following the COVID-19 new coronavirus pandemic. (Photo by Piero CRUCIATTI / AFP)

#Caribbean – April 17, 2020 — Someone needs to answer for the Coronavirus which has infected over two million people around the globe, killed over 145,000 of those infected and collapsed dreams, industries and economies.

In under four months, the contagion has wiped out decades of dedicated work to building a more interlinked and interlocked global community and deflated the expectation for a buoyant beginning to a new decade.

The 2020 we all imagined is forever tarnished, and while there is optimism that this season will pass, it is startling that country leaders – save for maybe one – lack vigor when it comes to finding the culprit.

At an agonizingly slow pace, truths are emerging including that China under reported deaths related to the novel coronavirus by 40 percent and other, more controversial charges allege that the disease is not at all derived from a bat bought and eaten in Wuhan through its blacklisted wet market, but more dastardly, that it was created in a laboratory in that capital city of China’s Hubei province.

It is a peculiar thing to many mourners, onlookers and victims that this crime against humanity, as it appears to be, has no obvious investigator trying to hunt down the perpetrator.

Usually, in events when people are hurt or killed, there is unrelenting, headlining, focus on catching a suspect; apprehending a possible killer.  Not only in an effort to ensure someone is held responsible for the injustice, but to ensure that the tragedy never, ever repeats itself.

Not so or less so in this case.

The world’s health police has reported no such investigation and the world’s leaders who pay them on behalf of the 7.5 billion people on the planet, including the 145,000 who have died and the 195 million projected to be thrust into unemployment are virtually ‘mum’ on the matter.

Except for the vociferous Donald Trump, President of the United States of America – who was scolded  for announcing that the US would halt funding to the United Nations’ health arm, aka the World Health Organization – there is no mainstream report of someone demanding better service by the WHO and prominently pursuing  who caused this mess.

As expected, since U.S. President Trump made his announcement, there are finally media reports probing and pressing for pertinent answers on who is responsible for the virus which has precipitated such a dismal level of causalities and a world recession of unprecedented proportions, as announced by the International Monetary Fund (IMF) earlier this week.

It is unacceptable that people who have scraped and scrounged, people who have dug deep and plowed hard to build their families and countries had to die alone; locked in a room, forced to make death declarations to four walls, or strangers all while gasping for air, when they ordinarily enjoyed a rich relationship with their loved ones.

It is unacceptable, that millions of people, who were poised to have their best year ever financially, have had to accept letters of termination or closed the doors of businesses they have built from scratch.

It is unacceptable that we can no longer shake each other’s hands or give a greeting by kiss or hug; that we are now afraid to speak face to face due to fear that a sliver of saliva may reach our mouths or eyes and infect us with this respiratory attacker.

It is unacceptable that people who have labored in the valued medical profession are being sickened, are terrified of going to their own homes, being with their own families and some of them catching COVID-19 and dying from it.

It is unacceptable that we cannot visit our aged -parents and grand-parents because they have superannuated and are most susceptible to death from this disease.  Generations unfairly unhinged by this public health crisis.

And it is unacceptable that our governments, who in most of our small island countries were already struggling to make ends meet for the people dependent upon them, are now scampering to find solutions. We have watched these administrators labour for ways to ease the pain, fill the voids and pledge what they cannot afford, which means our indebted countries are plunged further into debt.

If my commentary sounds angry about what Coronavirus has done to the world; you are not mistaken.  I am angry and I am brokenhearted every time I consider the pain and suffering this is causing to my fellow human beings.

We all hear the rumors and reports, so conveniently labelled ‘fake news’ about the possible motivation for this allegedly man-made contagion.  Greed and Pride and Folly; among the most shallow characteristics have probably birthed this beast.

I am a believer in Jesus Christ and Almighty God and so I know there is purpose and there is embedded within humankind an indomitable spirit which will cause us to prevail and to emerge enriched by this experience.

Still, my faith in this truth does not extinguish the fire for answers and explanations on behalf of mankind.

The culprit or culprits cannot and must not go undetected or unpunished and 2020 must be the year when global organisations which pledge to uphold marvelous mandates on behalf of humanity, will recommit to doing their jobs or else face being terminated by the people of this planet.

It is time to find the cause of this killer of our loved ones, our livelihoods, our ways of life and our economies; it is time to for the narrative to shift from coping with COVID-19 to catching whomever is culpable.