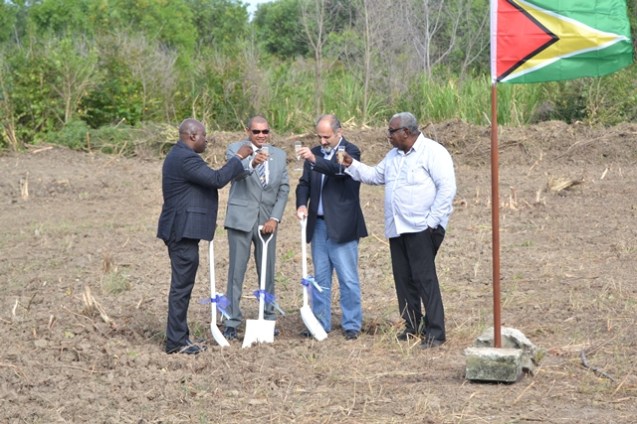 #Guyana, February 13, 2020 — “Our government welcomes and supports investments of this nature. The coming to Guyana of AC Marriot is an investment the government is applauding”

So said Minister of Business Hon. Haimraj Rajkumar at a symbolic turning of the sod ceremony for the proposed Trinuyana Investments Incorporated of Guyana backed AC Marriott Hotel on the Ogle Airstrip Road.

The investment company recently signed an agreement with the National Industrial and Commercial Investments Limited (NICIL) to develop a select-service, internationally branded hotel.

The US$75M, 150-room hotel, “with 20,000 square feet of office and retail space” is already underway with the commencement of Geotechnical works, projected to be completed in thirty (30) months.

NICIL’s Business Development Officer Racheal Henry noted that the hotel adds to the national stock, which will stimulate the local economy through additional employment opportunities and business development.

It was explained that Trinuyana Investments Incorporated will target business travellers to Guyana, especially those linked to Guyana’s emerging ‘Oil and Gas’ sector and the creation of the ExxonMobil (Guyana) Headquarters, which will be situated in proximity to the Eugene F. Correia International Airport.

Principal investor, Trinidadian John Aboud said the project is expected to provide an initial 400-plus jobs during construction and some 200 permanent jobs upon completion with “only five ex-pats”.

Chief Executive Officer acting of NICIL, Colvin Heath-London congratulated Aboud and team, noting that the people can expect NICIL pursuing several opportunities that will yield significant revenues and benefits for the country.

“We are very pleased with the investment that Mr. Aboud and team will bring to Guyana. We are confident that the government and people of Guyana will certainly benefit from this major hotel investment,” Heath-London said.

He revealed that next week, a similar ceremony will be held for another state-of-the-art hotel, in the same community, creating 300 temporary and 175 permanent jobs.

“It is safe to say that with the two projects on board some 700 temporary jobs will be available during construction with 375 permanent jobs after. With NICIL’s support, a cold storage facility will be opened at Wales Estate providing further employment opportunities for youths and community members affected by the restructuring of the sugar industry in that region.”