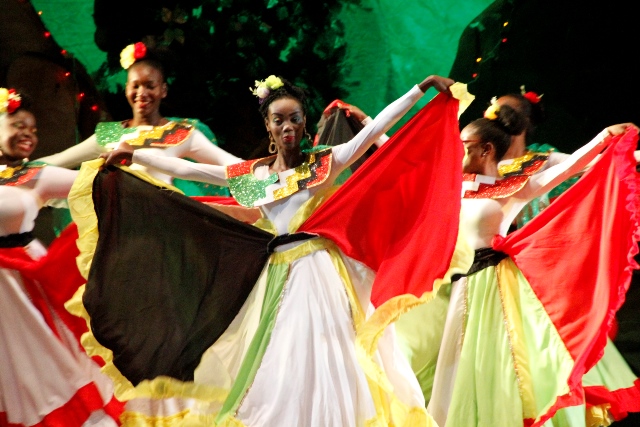 Delivering the feature address, Minister of Education Dr. the Hon. Nicolette Henry said that the competition will contribute to Guyana’s Republican Jubilee Celebration.

She said that the National Theme for this year’s Mashramani which states: Guyana Together: Reflect, Celebrate, Transform, underscores the importance of all Guyanese to unite as one people, in pursuit of a prosperous destiny for this great nation.

According to Minister Henry, the theme also asks of Guyanese to reflect and acknowledge the struggles and sacrifices our ancestors made. She said, “This reflection should build our determination to validate those sacrifices by enhancing our national state of identity with class and dignity that is above and beyond international standards.”

Moreover, Minister Henry reminded those in attendance that Guyana is in its decade of development. She said that this developmental phase should instil in Guyanese the need to take Guyana to the next level.

Nevertheless, Minister Henry noted that 2020 is a year of transformation, restoration and socio-economic evolution, so there is much to celebrate.

Speaking to the students, the Education Minister said, “As you showcase your talents allow your festivity, performance and spectacle to educate the public about what this republican status means, or even that it exists. Your role is to display that brilliant transformation through your heartened performances.”

The Children’s Mashramani Competition began in 1992 and is organised by the Unit of Allied Arts. The administrator of the Unit of Allied Arts, Ms. Lorraine Barker-King said that due to the interest, vision and contribution of Minister Henry in the schools, there have been improvements in many ways regarding the arts.

She said that the arts have become more visible and physical education is now being done in most if not all schools across Guyana.

She said that this improvement could not have been possible either without the support from the officers within the Ministry, teachers, parents and members of the community.

“We have to ensure that the arts progress and take its rightful place at the centre of the curriculum”, Ms. Barker-King noted.

She added that the opening ceremony was intended to reflect on the history and beauty of Guyana and its people through the arts.

Corporate Communications Officer at Ansa McAL, Mr. Treiston Joseph said that his company is happy to be a part of the event. He said that it is an important opportunity for students to display their talents and that Ansa McAL wants to play a role in the advancement and development of Guyanese.

Communications Manager of Banks DIH Ltd, Mr. Troy Peters said that the Children’s Mashramani activities are significant as Guyana celebrates its 50th Republic Anniversary. He said that the Costume and Float Parade will bring colour, creativity, teamwork and enjoyment to the children and spectators come Saturday.

Following the opening ceremony, steel pans were handed-over to the Mahdia Secondary School which represented the continuation of an exercise by the Ministry of Education to distribute steel pans to schools across Guyana to enhance the music programme.

Additionally, there was an exhibition held in the foyer of the NCC where various departments of the Ministry of Education showcased the services they offer and what developments have been taking place.