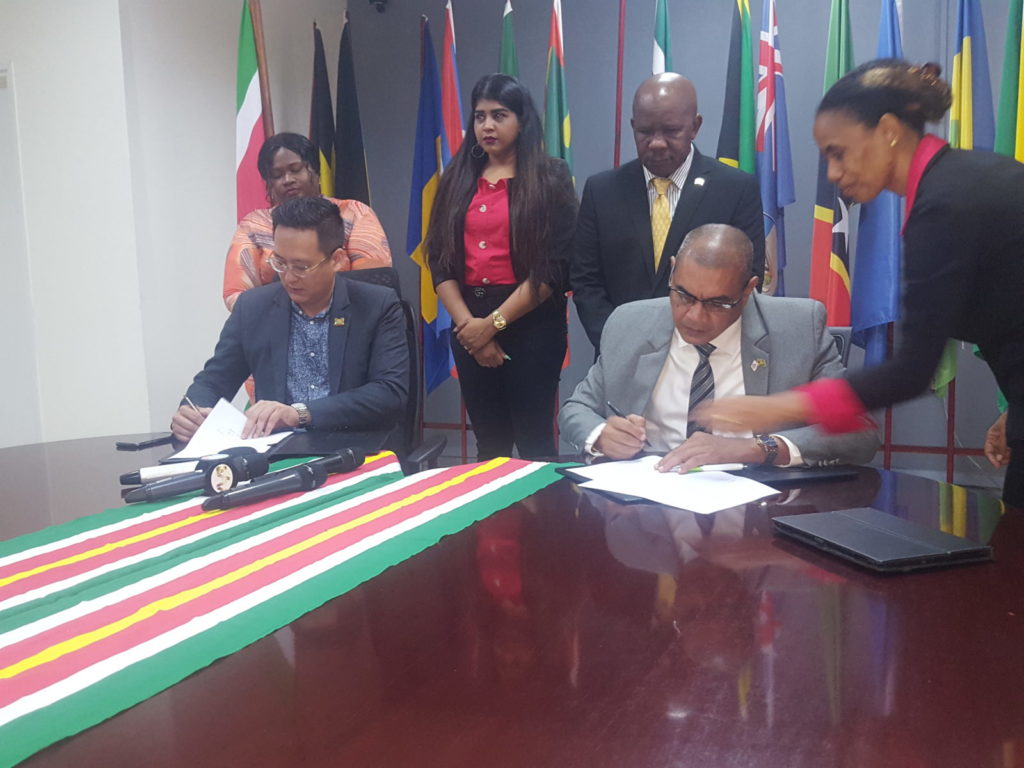 #Guyana – January 4, 2020 — Amidst the din and clamour of the end of year festivities in Paramaribo, a calm, serious and far-reaching event was taking place within the Boardroom of the Minister of Trade, Tourism and Industry of the Republic of Suriname.

On Monday December 30, after a 2- year gestation period of negotiation, drafting and refining, the Ministry of Business which has responsibility for Tourism in the Cooperative Republic of Guyana and the Ministry of Trade, Tourism and Industry of the Republic of Suriname signed a historic Guyana-Suriname Tourism Accord.

Signing on behalf of Guyana was Minister of Business, Hon. Haimraj Rajkumar, while Minister of Trade, Tourism and Industry, H.E. Minister Stephen Tsang signed on behalf of Suriname. Witnessing the ceremony on the part of Guyana was the Director General of Tourism, Mr. Donald Sinclair and the Charge D’Affaires of the Guyana Embassy in Suriname, Ms. Malvie Talbot. From Suriname the signing was witnessed by Mrs. Rachel Koningsbloem-Pinas, Permanent Secretary for Tourism and Mrs. Yvette Rokadji, Permanent Secretary for Trade in the Ministry of Trade, Tourism and Industry of Suriname.

The Guyana-Suriname Tourism Accord is a framework Cooperation Agreement that will underpin efforts in both countries to increase tourism business between the two territories and enhance the growth of a sustainable tourism product that will attract larger numbers of visitors to Guyana and Suriname. The Tourism Accord is viewed as a very timely and strategic mechanism, coming as it does in the midst of preparations for the February 2020 Tourism Expo of the Guianas which Guyana will be hosting at the Arthur Chung Conference Centre.

The vision, hopes and planning for such a Tourism Accord date back almost two decades and that long antecedence speaks to a common and shared national vision that has been kept alive through successive administrations in both countries. Even as the current Tourism principals celebrate the December 30 formal signing, the debt to past Tourism Ministers and actors is one that is happily acknowledged.

After the signing Tourism representatives of both Guyana and Suriname met informally to outline the immediate steps in actioning the Accord. Key among those is the establishment of a Guyana-Suriname Tourism Cooperation Council, to be convened within one month of the signing. This Council will oversee all actions arising from the Accord, and will comprise three representatives from each country, drawn from both Public and Private sector.