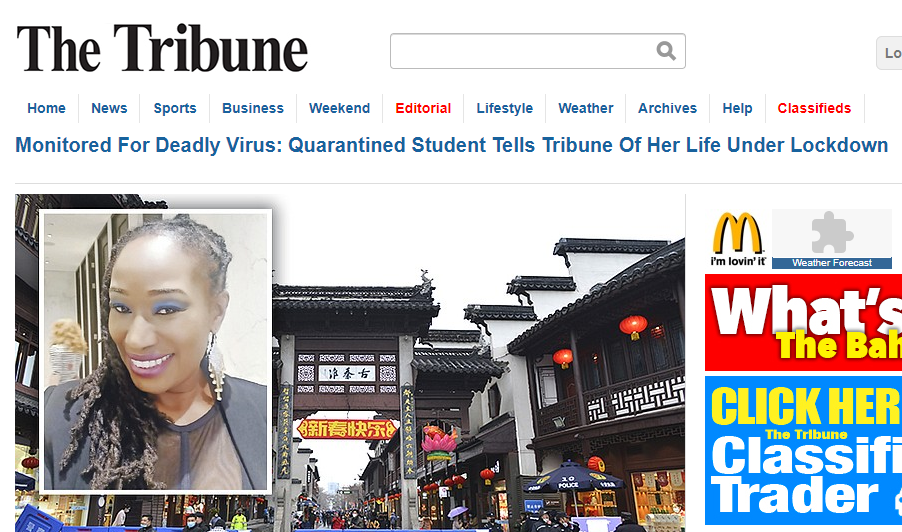 #CARIBBEAN, January 31, 2020 — A week of extremities experienced across the Caribbean and for Caribbean students resident in Wuhan, China, which is the epicenter of the now global health emergency and deadly Coronavirus.

Emerica Robinson is one of those students and has told The Bahamas Tribune newspaper that she has been quarantined in the neighbouring city, Nanjing; visited by the police and doctors at her residence and is under watch for the next 14 days to monitor whether she shows any sign of having the virus.

Robinson is a Bahamian student attending university in Wuhan and says she has no plans to return home to The Bahamas, will stay put and will do as doctors have prescribed, which is to check her temperature twice a day and to report each test result to the hospital.

The Bahamas Ministry of Foreign Affairs had confirmed there are five Bahamian students at university in Wuhan.  Bahamas Health Minister, Dr. Duane Sands, yesterday reported that two of them are quarantined and as of Thursday, The Bahamas will quarantine anyone who has been to mainland China in the past 20 days.

At least two critical press conferences have been held in the Caribbean – the first was in Jamaica where the University Hospital of the University of the West Indies was on lock down following the transfer of a patient to the facility.

Word got out that the person, who had recently returned from Asia, was suspected of having coronavirus.

Dr. Christopher Tufton, Jamaica’s Health Minister led a press conference to explain the action taken out of ‘the abundance of caution’ and eventually informed that there was no coronavirus case in Jamaica.

Mere minutes after this press conference wrapped up on Monday, there was a 7.7 magnitude earthquake recorded – it struck at 2:10pm in waters off Jamaica.  The USGS said the earthquake affected Jamaica, Cuba, Cayman Islands, The Bahamas, Haiti and Honduras.

The tremors caused The Bahamas to close government offices along Shirley Street in Nassau.

Lots of cell phone video of the moments during and after the earthquake was shared on social media by residents of Cayman.  Some people captured the actual shaking, others recorded the gaping sink holes left behind on main thoroughfares, golf course, beach, in backyards and neighbourhoods, proving that the monster quake was anything but imagined.

By Thursday, a line of squally, stormy showers moving off South Florida and over the Abacos resulted in a tornado, confirmed The Bahamas Department of Meteorology.

A mangled mobile home, which was unoccupied at the time of the tornado seemed to be the main victim of the twister which moved through Marsh Harbour, “like a freight train” in the early hours of Thursday.

It appeared the tornado lifted and crashed the vehicle to the ground; it was completely destroyed.

Marsh Harbour, which is the capital of Great Abaco, is still trying to recover from deadly and disastrous Hurricane Dorian.