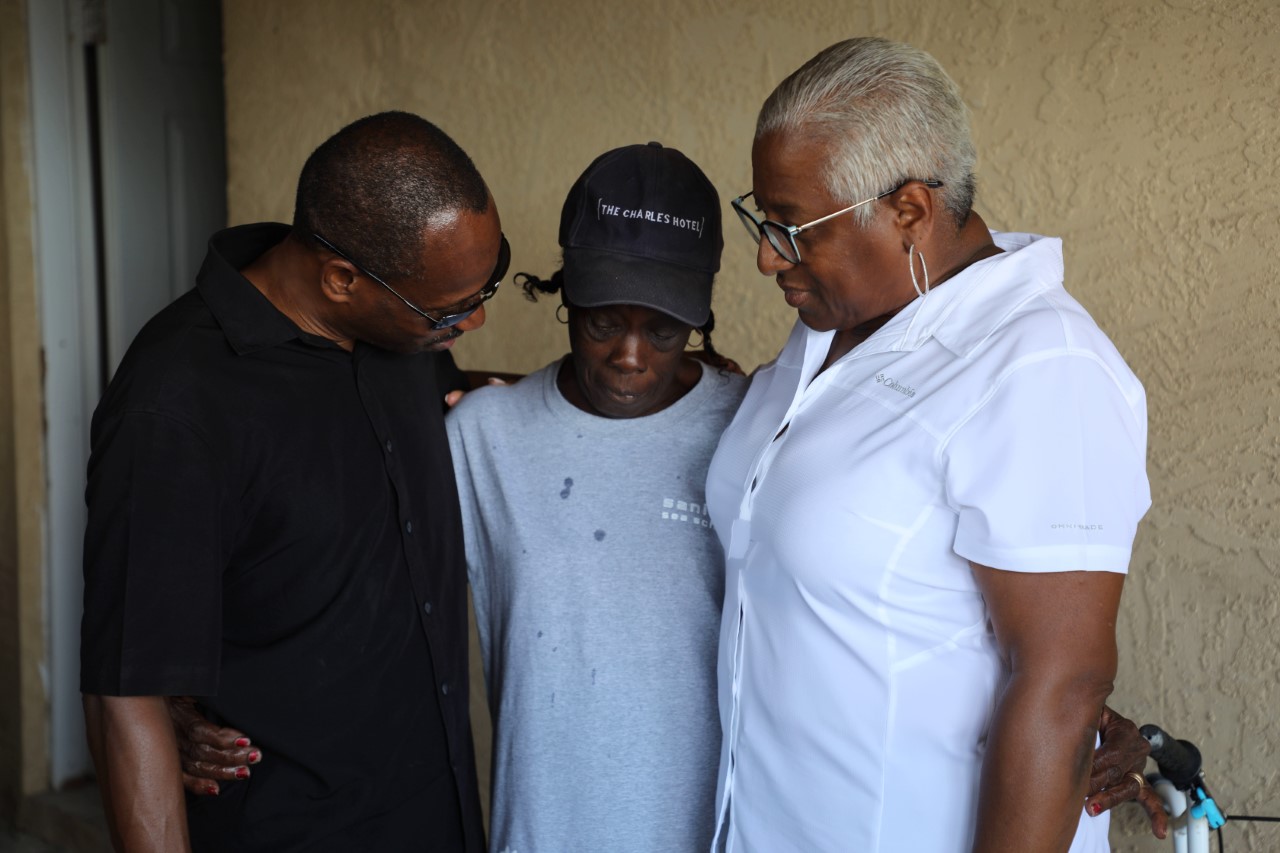 East End, GB, October 8, 2019 – Bahamas – The National Emergency Management Agency’s (NEMA) Operation Relief made its way to the quaint and peaceful settlements in East End and was received by residents with grateful hearts and opened arms.

Recently, the team, led by Senator Kay Forbes-Smith NEMA’s Grand Bahama Coordinator, loaded up a box truck of hurricane relief supplies and with a convoy of volunteers, headed to the communities of Grand Bahama that were the hardest hit by Hurricane Dorian when it blew through the island on September 1, 2019.

The trip to the East was more of a reconnaissance mission as much as it was a mission of supplying needed relief items.

Sweeting’s Cay was the destination, but obvious needs in communities along the way diverted the route, as Senator Forbes-Smith; Grand Bahama Christian Council President, Robert Lockhart; Island Administrators and NEMA volunteers stopped to deliver cases of water, canned goods, hygiene products, dry goods and words of encouragement to residents in other communities.

The trip to East Grand Bahama was carried out by all of NEMA support services working on post Dorian efforts. Bertha McPhee led the team from the Department of Environmental Health, along with the Commander of the Defence Force, Special Forces from the Trinidad police force and local NEMA volunteers.

At each stop, where care packages were delivered to residents, Senator Smith, Pastor Robert Lockhart, East End Administrators and NEMA volunteers listened as home owners and even children expounded the horrors they faced in riding out Hurricane Dorian in East Grand Bahama.

“We wanted to talk to residents in McLean’s Town, in High Rock, in Pelican Point and on Sweeting’s Cay about what their needs are and where they are following Hurricane Dorian,” said Senator Forbes-Smith.

Words of comfort and encouragement were offered, as Pastor Lockhart told home owners to continue to stay strong and to believe in the fact that things will get better.

As the team moved further and further east, the devastation got more severe. In High Rock, only the frames of homes remained. The government complex (which housed a police station, National Insurance Board and a small post office) was obliterated. The High Rock clinic across the street was flattened, with the four walls of the small building lying in four different directions, as if someone had intentional pulled the building apart to see what was inside.

By the time the convoy reached McLean’s Town devastation and the idea of losing everything took on new meaning. The once thriving, robust, active community, where Grand Bahamians would gather by the dock awaiting a boat to get to Abaco or Sweeting’s Cay lie deserted.

Homes that had been abandoned by its occupants during the height of the storm, sat shattered, some had roofs caved in, some had walls blown out and some were only concrete foundations, the only indication that a house at one point stood there.

The remnants of toys, clothing, yard equipment, house appliances and other personal items were strewn over yards where houses had been destroyed.

However, the destruction caused by Hurricane Dorian would also show up in the nearby sea, during the boat ride from McLean’s Town to Sweeting’s Cay, where cars littered the water near the dock. It was unclear how so many cars ended up in the sea surrounding McLean’s Town, but speculations suggested that the high tide that had moved on land, receded, pulling cars with it into the sea.

Sweeting’s Cay would suffer the same fate as McLean’s Town. Not one home or building on the small cay escaped Hurricane Dorian’s wrath. Some were more damaged than others, but all were basically uninhabitable. Yet the people on Sweeting’s Cay insisted on staying, not wanting to leave what they had worked so hard to accumulate, in spite of the fact that it was all lying in rubble.

On the surface, one looking from the outside in, would have found it difficult to believe that Sweeting’s Cay residents had gone through a major hurricane and that they had lost all that they had to that storm, because they greeted the convoy of NEMA volunteers with welcoming smiles, hugs and genuine appreciation.

Supplies were unloaded and taken to a central location on the Cay, where residents gathered and the supplies distributed based on individual need. A tour of the Cay would reveal destruction that seem unimaginable, yet miraculously, no one on Sweeting’s Cay lost their life to Hurricane Dorian.

According to Senator Smith, the trip gave NEMA some insight as to where residents on Sweeting’s Cay and in East End stood in terms of their needs.

“From this trip, what we found is that we have to come up with a different strategy for debris removal in east Grand Bahama and we also have to talk about the education that we need to provide to the community as it relates to mold remediation.

Header: Pastor Robert Lockhart (left) and NEMA Coordinator (GB), Kay Forbes-Smith (right) offers words of encouragement and comfort to a resident in High Rock who suffered great loss as a result of Hurricane Dorian that devastated the Eastern part of Grand Bahama when if passed through the island on September 1, 2019.

2nd Insert: Senator Kay Forbes-Smith, NEMA Coordinator (GB) chats with a resident of Sweeting’s Cay, while the hurricane relief supplies for the community was off loaded from a boat and placed at a central location on the island, during NEMA’s distribution of supplies to residents in East Grand Bahama.

3rd Insert: A well-known resident and business owner from High Rock, affectionately known as “Bishop” points out the severe damage that was done to his restaurant and villas in High Rock as a result of Category 5 Hurricane Dorian. At right is NEMA Coordinator (GB), Senator Kay Forbes-Smith.