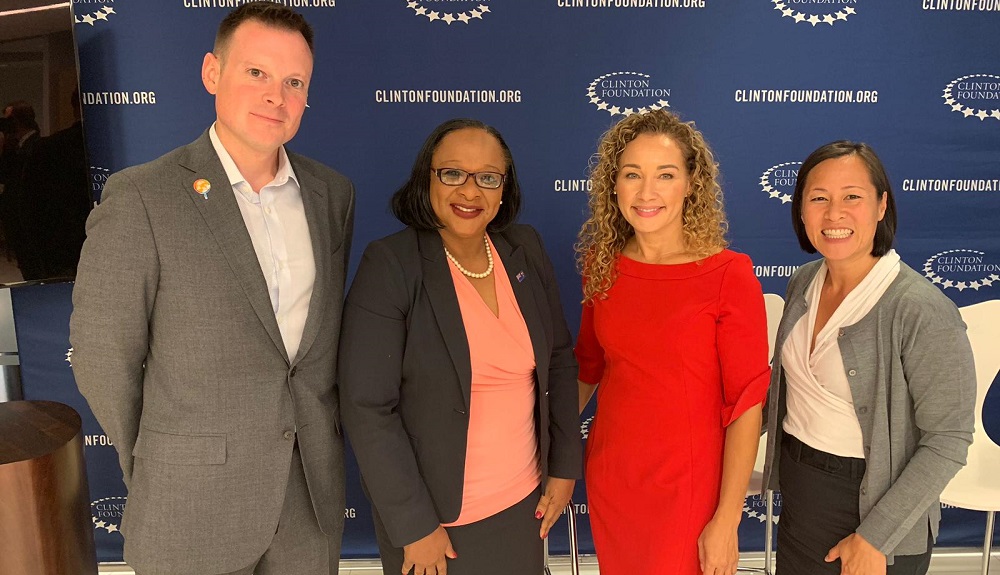 During the discussion, speakers shared ongoing efforts in the Caribbean to fortify its future in the face of climate change while inspiring new, specific and measurable ways to contribute to the progress being made throughout the Caribbean in terms of climate resilience.

The panellists including Premier Robinson were asked questions on disaster management and post-disaster recovery plans to share information with other Caribbean country representatives on different methodologies, planned initiatives, policies and strategies to mitigate disasters and minimise the overall recovery time after a major natural disaster.

Premier Robinson spoke during the panel discussion on TCI’s Recovery process post Category 5 Hurricane Irma in 2017. She accredited the minimised recovery time to carefully planned preparedness strategies that would be active in a state of emergency like that of a natural disaster, a strong economy and open communication from quick responding utility service providers.

Commenting on how TCI as able to bounce back so quickly after a storm of that magnitude, Premier said, “The Turks and Caicos maintaining insurance protection via its Caribbean Catastrophic Risk Insurance Facility demonstrates the proactive approach we have taken to manage the contingent risks posed by climate change. It proved beneficial after the passage of the storms.

The Turks and Caicos Government’s fiscal policies enabled us to maintain our Standard and Poor’s sovereign rating of BBB+; an economic indicator of the TCI’s strong fiscal position and a reflection of our ability to economically withstand the effects of a large scale natural disaster.

Our economic position further enabled my Government to provide direct assistance to Turks and Caicos Islanders in bearing the financial burden of repairs in the short term by waiving both the customs import duty and customs processing fees on items needed for home repairs and over the long term to potential and existing property owners through a Homeowners Empowerment Policy.”

She added that the TCI Government continues to invest in resilient infrastructure and critical facilities following 2017 and well into the future.

The Premier also took part in a private roundtable with former president of the United States of America and founder of the foundation President Bill Clinton.

The Clinton Foundation’s Clinton Global Initiative Action Network brings together a diverse group of stakeholders to focus efforts on putting people first, including prioritizing a resilient future by helping communities to plan and prepare for future storms and the mounting effects of climate change. The convening of the Action Network follows last June’s meeting in the United States Virgin Islands and calls on members of government, private sector, and non-profits to continue the work started in 2018 in direct response to Hurricanes Maria and Irma.

Action Network members discussed progress made on their first initiatives and with the recent relief and recovery efforts in the aftermath of Hurricane Dorian’s impact on the Bahamas. It outlined the continued need to foster economic growth in the Caribbean that is sustainable and climate-shock resistant.