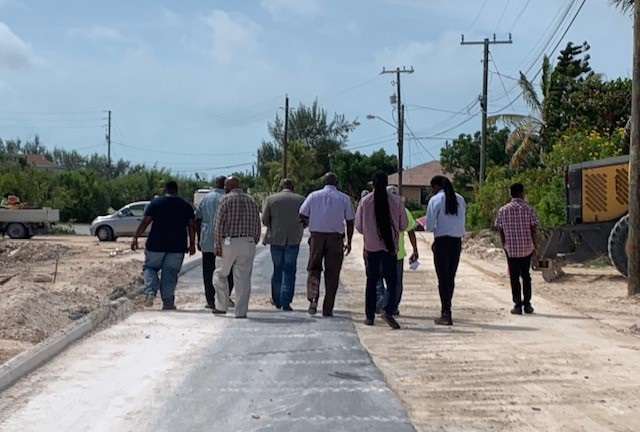 #Providenciales, August 13, 2019 – Turks and Caicos – The Deputy Premier and Minister of Infrastructure says that he is pleased with the progress on Public Works managed projects, and in one case an early completion which will result in keys being handed over this month.

A media release from the office of the DP explained: ‘The Deputy Premier and Team then visited the newly completed EMS (Ambulance) Base, on Leeward highway. This project was recently completed ahead of schedule at a cost of approximately $140K. The keys are to be officially handed over to users this month.’

Schools featured largely in the tours.  Oseta Jollly Primary and Clement Howell High in Blue Hills and new Long Bay Primary Schools were all toured and again there was satisfaction expressed at the progress of the projects.

By June 2020, hurricane refurbishment work at the Oseta Jolly Primary School will be completed; it was the second site visited by the Deputy Premier.

Phase one of the School Infrastructure Project at OJPS is an investment of $1.8 million.  Work to ‘repair and upgrade’ began in February and is on course for an on-time completion in February 2020.

Phase two for OJPS will deliver a new Early Childhood Block.  It meant removal of the old container classrooms.

The Minister’s report said: ‘The project has an approximate cost of $1.5 M. The project commenced in June 2019 and is scheduled to be completed in June 2020.’

At Clement Howell High, $700k in repair work is tackling the goals of phase two of the high school’s infrastructure project and should be completed in April next year.

The Infrastructure Minister said his tour was aimed an ensuring quality work delivered on time, and initially took Deputy Premier Astwood to the road works under way in Five Cays and Wheeland.

The tour took the DP to Lot 1 Laney Lane in Wheeland, which was due to be finished last week and Tumpa Avenue in Blue Hills, which is scheduled to be all done by September.

His report on the ‘Phase 4’ of road projects explained:  ‘….The Contract includes the road to the radar station which is 95% Completed, Granny Hill and Matilda Way and the removal of derelict vehicles within the area of the Project. This project commenced in April 2019 at a cost of $1.3 M and is scheduled to be completed in September 2019.’

The tour by the Minister and his team of the new Long Bay Primary School was described as an “intricate inspection”.

The DP in his report to media said: ‘This project has an estimated total cost of $4.7 M. It originally commenced in September 2018, the project was stopped for a brief period due to a legal challenge but recommenced in February 2019, it is on schedule for completion August 2020.”

Overall, the Deputy Primer and Minister responsible for infrastructure shared that he is pleased with the progress of the ongoing works viewed on Monday August 5, 2019.  Hon Sean Astwood added that he is committed to getting timely progress reports and seeing all the projects through to fruition.