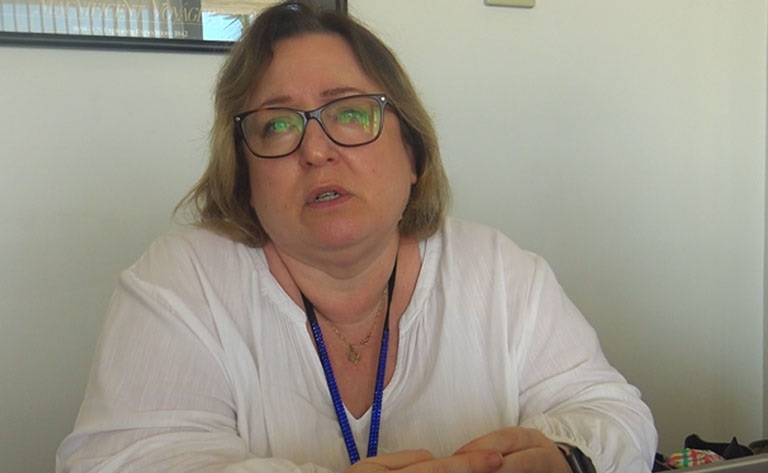 “Thank God, I haven’t had to see the fire fighters in major action yet but I’ve seen them operate and react to a lot of minor incidents.  We have one of the finest in the Caribbean.  These guys and women are an elite fire fighting force and I think that we need to recognize them and we need to treat them as such.  So, I feel for them, I understand what their complaints are and I hope that we are all going to be speaking to our representatives and encouraging the Airports Authority to do their best with them,” said Deborah Aharon, CEO of Provo Air Center during an interview with Magnetic Media on Friday.

Twenty of the 25 fire crew walked off the job on Thursday, citing their frustration at requests for improvements and fairness on the job as reaching a breaking point with the Turks and Caicos Islands Airports Authority, TCIAA.

Aharon, who has been in the airline business for over 20-years explained, “We rely on them, as we learned today, if they’re not working, nobody is moving.  To me they are heroes just for showing up every day.”

The fire fighters claimed, “employment abuse” by the TCIAA and their strike left the airport with insufficient fire fighters and crippled operations at the country’s busiest airport.  Flights on Friday were delayed and some cancelled as a result of manpower shortage. The incident almost forced cancellations at the Fixed Base Operators, FBOs or private airports.

“In the beginning, it was a little bit scary because everybody had to stop;  interCaribbean, United, Delta and I think they had to make special arrangements to get American off on-time today, which was a blessings, they came up with work-arounds and some of the fire fighters started coming in to help.  For the FBO, the problem is that most of the one percent visitors are coming in on large private jets, they are coming in on Challengers, Gulf Streams and those are fire-fighting category six.  So, for most of the day we were operating at category five, so that meant that some of our customers could not come in today or could not take off.  Luckily the Airports Authority worked it out, just before I had to start notifying customers.”

The 23 men and two women which make up the fire crew at their airport told Magnetic Media that they were treated unfairly by the Airports Authority.  Overtime pay was unpaid and sometimes their hours were adversely manipulated, the fire station where the crew could spend up to 16-hours on shift, was run down according to the spokesperson for the group.

Speaking to us at her office at Provo Air Center, which is located on Aviation Drive, Aharon said:  “I don’t know much about it (the complaints) but I would certainly hope that the Airports Authority is going to put every effort into making sure that they have the comfortable working environment that they need.”

The fire fighters on Friday afternoon managed to secure a meeting with the Premier, the Governor and the Deputy Chairman of the TCIAA board; it led to an amicable end to the stalemate and a return to work with the crew feeling optimistic about concerns finally being addressed.

For Provo Air Center, which handles the lion share of private flights to Providenciales, this was great news.

“I really hesitated to notify customers, because we don’t want this to get out into the world.  So, I think we dodged a major bullet today.  I hope that they’re going to keep the dialogue going and they’re going to reach a good agreement in order for us not to have to face this again.”

Both Provo Air Center and Blue Heron Aviation share a site with the Providenciales International Airport.  The fire fighters stationed at PLS are trained, equipped and mandated by international regulations to be on emergency stand-by in the event planes landing at either of the three facilities, experience trouble.