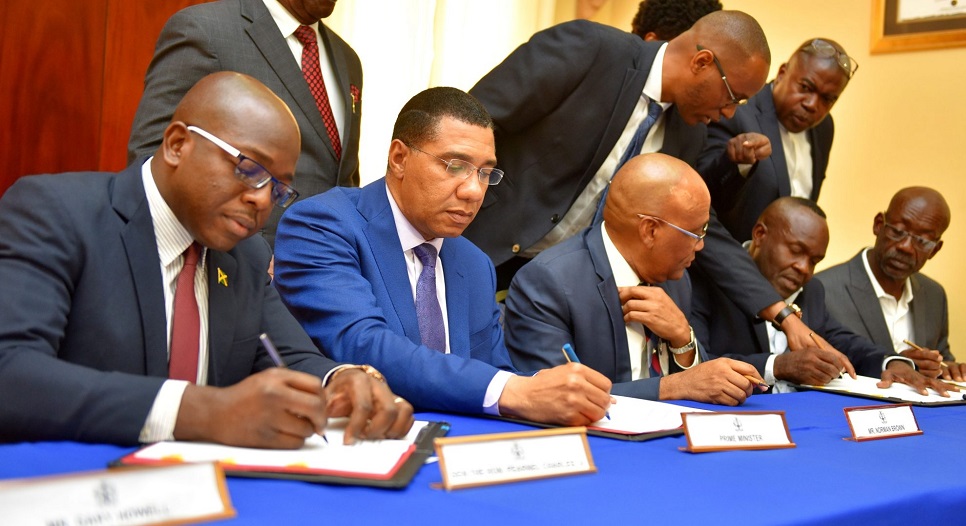 #Kingston, August 10, 2019 – Jamaica – Construction is to begin by December on 623 new solutions under the Shooter’s Hill Housing Development project in Portmore, St. Catherine at a cost of $7 billion.  This is being facilitated through a joint venture agreement between the Housing Agency of Jamaica (HAJ) and Rite Solutions Development Company.

Under the public-private partnership, affordable housing solutions, starting at $7.6 million, will be built on 157 acres of elevated land, primarily for low-and middle-income earners.  The development is in keeping with measures by the Government to address the deficit of approximately 20,000 housing solutions yearly.

Prime Minister, the Most Hon. Andrew Holness, who signed the agreement along with principals of HAJ and Right Solutions at Jamaica House on Thursday (Aug. 8), said the costs of the units to be provided are “fairly reasonable,” especially for young professionals.

“I think these are very affordable. I can see the young nurse, the young policeman, the young university graduate immediately just waiting to get one of these (units).  I want them to know, those persons who are leaving university, a year or two out of university, getting themselves settled, that the Government understands. We know what your ambitions are and we are putting in place the necessary programmes to allow you to achieve your goal of owning your own home,” he said.

The Prime Minister noted that the lowering of the interest rates to zero for National Housing Trust (NHT) contributors, who earn $15,000 or less per week, has increased demand for housing.

“We have made the market bigger and now we are…ensuring that we are actually putting solutions on the market,” he said.

For his part, HAJ Chairman, Norman Brown, said that Shooter’s Hill “with its elevated location, panoramic views and gentle breeze, will undoubtedly add a new dimension to HAJ’s suite of housing projects in Portmore for which the market eagerly awaits.”

“We fully expect this project to be completed on time and within budget as this is the standard we have set for ourselves,” he added.

In his remarks, Attorney-at-law and General Counsel, Rite Solutions, Christopher Honeywell, hailed the partnership with the HAJ “in the provision of affordable and good quality housing solutions.”  He noted that Cabinet was instrumental in providing the guidance and leadership that went into the structuring of the joint venture agreement, “which ensured a speedy, and efficient take off” of the project.

The Shooter’s Hill Housing Development, which is to be done on a phased basis over a three-year period, will be a gated community featuring communal play areas, commercial space and a police post. Phase one will have the lower priced solutions, while phase two will have solutions with higher prices and more upscale finishes.