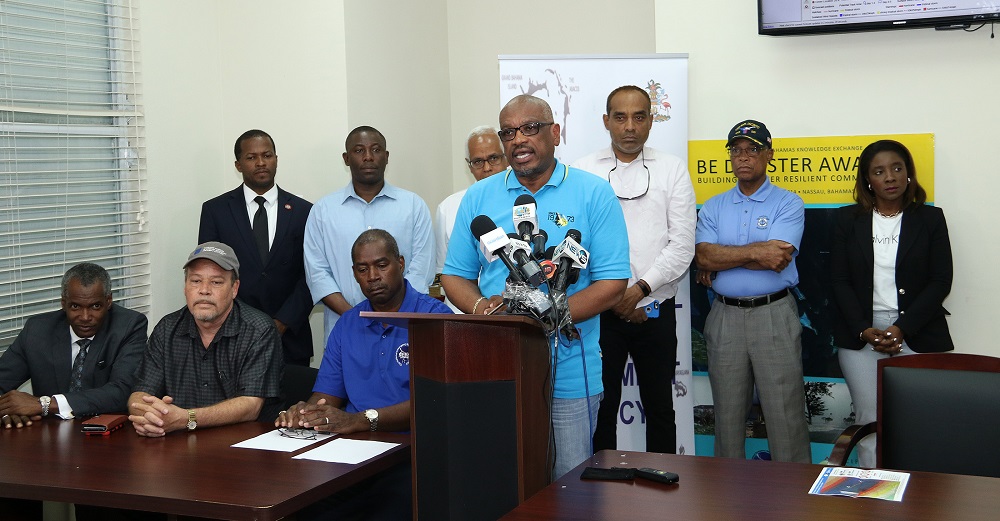 #Nassau, August 31, 2019 – Bahamas – In a last-ditch effort to make residents realize the severity of the potential impact of Hurricane Dorian, the Most Hon. Dr. Hubert Minnis, Prime Minister, strongly appealed to them evacuate to safer locations.

“I cannot stress enough how important it is for residents in the path of the Hurricane to evacuate and seek safe haven immediately.

“Those who do not evacuate are placing themselves in extreme danger and can expect a catastrophic consequence. Property and material belongings can be replaced. A life cannot.”

This was the Prime Minister’s earnest plea during a press conference at the National Emergency Management Agency, NEMA on Saturday, August 31, 2019 at 12 noon.

At the time of this briefing, Hurricane Dorian was described as an extremely dangerous Category 4 storm with winds up to 145 mph, and a “major threat” to the Northwest Bahamas, particularly the Abacos and Grand Bahama.

This was the pictured painted by the Prime Minister, based on predictions by the Bahamas Department of Meteorology.

“A prolonged period of potentially life-threatening storm surge and devastating hurricane-force winds are likely. Heavy rains, capable of life-threatening flash floods, are also expected over portions of The Bahamas.

“Increasing the threat is the projected slow down of the forward movement of Hurricane Dorian, which will increase the risk of additional storm surge in addition to the spring tide that we are currently experiencing.”

Storm surge is expected to reach 12-15 feet. The surge combined with potential wind exposure may result in severe damage to communications and power systems.

The hurricane is expected to impact an estimated 73,000 residents and 21,000 households. Storm surge is expected to reach 12-15 feet. And, the surge combined with potential wind exposure may result in severe damage to communications and power systems.

Evacuations started in Abaco and Grand Bahama from August 30 via ferry boats and aircraft. Shelters were also opened for individuals to take advantage of using them.

“All residents under Hurricane warning area – which includes North Eleuthera, Abaco, Grand Bahama, Bimini, the Berry Islands and New Providence – should listen to the advice given by NEMA and the relevant government agencies and have their hurricane preparations completed today,” the Prime Minister urged.

Residents of Abaco may begin feeling the effects of Hurricane Dorian – tropical storm force winds – by 1am Sunday and strengthening conditions thereafter, according to the Met Department.

The Prime Minister also strongly appealed appeal to residents of the northern cays and the North Abaco mainland to move to safer ground in the south. Plus, residents of the Mud, Pigeon Pea, Farm Road and Sandbank communities are also being urged to seek shelter during the storm.

Approximately 77 residents have already been evacuated from Grand Cay. Evacuations will continue throughout the day. Boats will be making regular stops at cays to collect residents. The airport will close at 3pm.

On Grand Bahama, residents may begin to feel the effects of Hurricane Dorian, specifically tropical storm conditions by 7am Sunday.

The Prime Minister strongly urged “all residents of East End, West End, Sweetings Cay and Waters Cay to wait the storm out in the interior of the island.

Shelters have been activated; including a special needs shelter at Foster Pestina Center at Christ the King Anglican Church. Evacuations will continue throughout the day. Also, Police are monitoring Fishing Hole Road.

Referring to other islands in the Northwest Bahamas such as New Providence, North Eleuthera, Bimini and Berry Islands, the Prime Minister admonished that they should have their preparations already completed.

“These islands may experience Tropical Storm force winds,’ he added, “hurricanes are unpredictable and residents should not take any chances.”