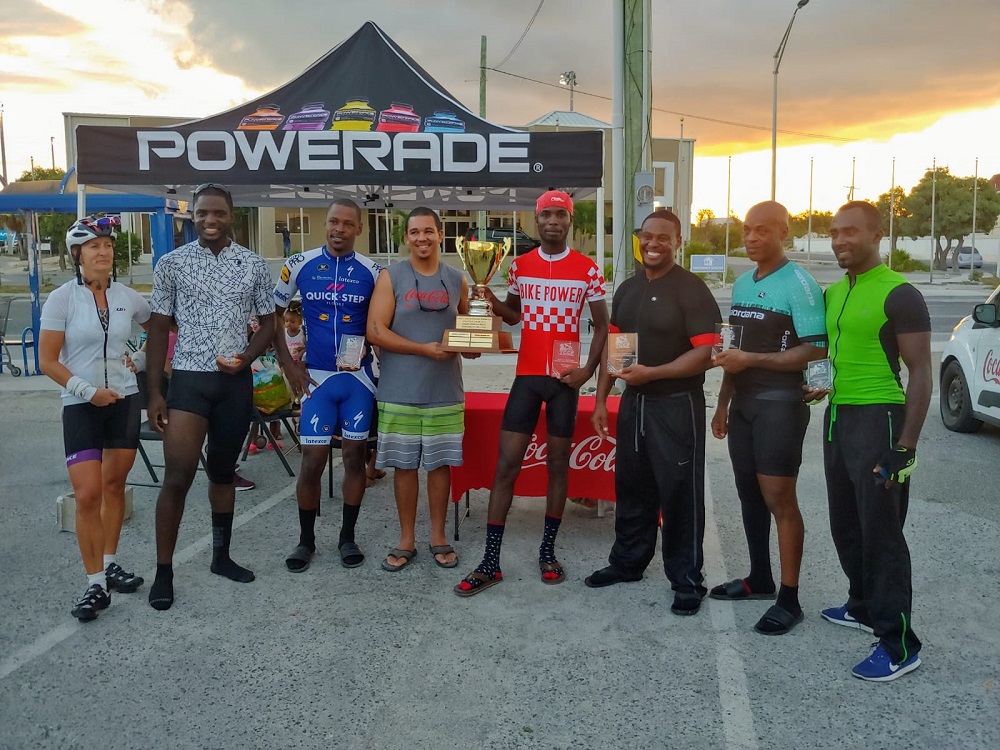 The arduous race began at 3:15pm with the all riders pacing themselves for the first few miles. Devaughn Williams then made a breakaway from the pack and created a sizeable lead. A lead he kept for around 20 miles when he suffered a fall and was caught by the peloton.

President Shanwell Gardiner suffered a flat and was able to make a quick change of wheel and was able to catch up to the group after about 30 minutes of solo chasing. The race intensity picked up as Sean Rodgers did his characteristic attacks, keeping all the cyclist in suspense as to when he will go again. Young sprinter Tyrone Bishop went for a solo break away around 40 miles into the race. The group made the mistake of not chasing him down until it was too late, which allowed him to ride away to victory.

First cyclist to cross the finish in the Masters or Elite category was named The Champion of Providenciales. Tyrone was bestowed and will have his name etched into the floating Coco Cola classic trophy.

Mr. Fred Registre winner of the master’s category but close on his heels were Sean Rodgers and Shanwell Gardiner placing 2nd and 3rd respectively. Tyrone Bishop continued his winning streak in the Elite category with Reno Palmer in second and his brother Chevorn Boishop in third.

Speaking on his win Tyrone said: First I would like to congratulate all of my fellow cyclist on a great ride. Every race I learn from myself, from mistakes and try to do better. It was all about strategy for this race, using my strengths where I could to make gains and taking risks. No pain, no gain. No risk, no reward. I credit my win to God for giving me the strength to endure to the end, my family, friends and team mates who always support, and of course my wife, who is my personal coach. I feel overwhelmed with joy, I always believed I could do it but accomplishing such a win was an epic victory for my cycling career. This is just the beginning. Blink and you miss it!

TCCF President Shanwell Gardiner is thrilled how the season is shaping up and how the cyclists are improving. What really excites the spectators is the fact that the races are not predictable. Everyone is improving and there can be a different winner in every race. This race was changed to add more hills to better prepare the team for the upcoming 20th Annual John T cycling classic. A team of 8 will be travelling to Anguilla for this event on 21st of July to represent the TCI. This is our third visit to Anguilla with cyclist performance improving each year.