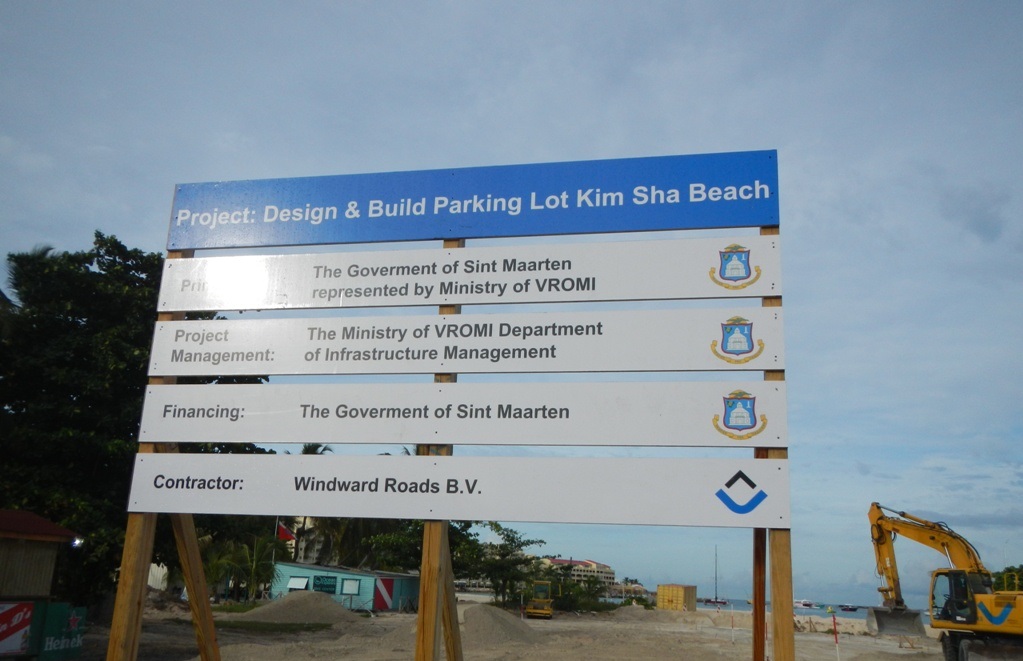 #SintMaarten, July 5, 2019 — The Ministry of Tourism Economic Affairs Transport & Telecommunication TEATT and the Ministry of Public Housing, Environment, Spatial Development and Infrastructure VROMI has decided to close the temporary vending outlets at the Kim Sha Beach Marketplace in preparation for the planned improvement project for that area.
Minister of TEATT, the honourable Stuart Johnson, told the Parliament of St. Maarten of his intention during the 2019/2020 Budget Debate last week. On Monday July 1, Johnson said the decision was not an easy one as it regards the livelihood of several individuals. He held discussions with the Vendors in both Simpson Bay and Philipsburg earlier this year and gave them an idea of what was planned. The TEATT and VROMI Ministry intends to build hurricane-resistant structures that were modern and attractive.


Both Ministers Johnson and VROMI Minister Miklos Giterson also explained that the intention was to work on finding an alternative location for vending during the time of the construction project for both Kim Sha Beach Parking Lot and Philipsburg vendors. The temporary location was created based on the need to accommodate cruise passengers since there was severe damage to Orient Beach and the Great Bay Beach, post Hurricane-Irma.
In a letter sent to the Vendors explaining the motivation for the decision not to extend the Vending Permits which expired at the end of June. Johnson said the original intention was to create a village of a variety of local food and beverage options to give our cruise and stayover visitors an authentic experience during the day and early evening hours. He noted that he had received several complaints regarding how some vendors managed their booths. Charges included loud noise, hygiene concerns and extended opening hours without prior authorization, which was a violation of their vending permits.

He said, “The intention was never for the marketplace to act as a late night hang out, especially considering the current issue of noise pollution in the Simpson Bay area and Government’s attempts to mitigate such pollution. It is for this reason that a ban was placed on (loud) music and a closing time of 10 pm was implemented for the Kim Sha market place.”

Once the new facilities are constructed, vendors will have to adhere to strict rules governing their operation. Johnson said the concern that some have over Inspectors and Police targeting specifically the Market Vendors was based largely on misinformation. “When it comes to noise pollution and the disruption of the otherwise pleasant experience of our visitors on whom we depend for economic activity, no business is exempt from controls,” said Johnson.
He said Inspectors conduct routine checks to see how much decibels of noise is produced by the various sound systems throughout Dutch St. Maarten. Police officers are also called regularly to different areas on the island where either residents or business owners are alleged to be causing a nuisance with their music. Johnson said the Control Officers from the Ministry of TEATT have a clear mandate on what they should look for, and that has always been in place.
Where it concerns the Police officers who may from time to time close businesses found to be violating the law, Johnson said: “the police are just doing their jobs.”

“If the police get complaints about loud noise coming from these vendors after certain hours and find that the permits in their possession do not allow them to open at that hour, the decision is within the prevue of the Police and Justice Department to determine that the Vendor must close,” said Johnson.