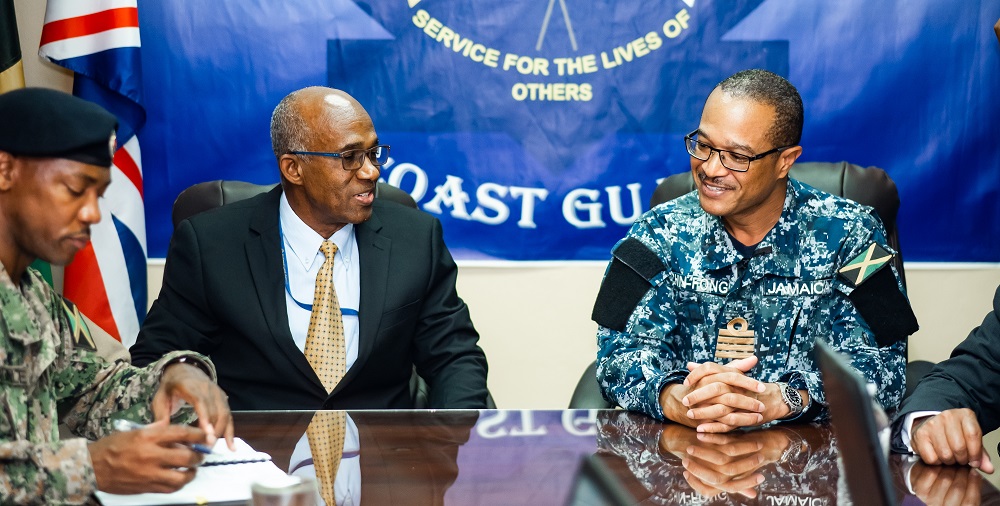 #Kingston, July 4, 2019 – Jamaica – The National Land Agency (NLA) and Jamaica Defence Force (JDF) have signed a Memorandum of Understanding (MOU) that will facilitate hydrographic surveys of the seabed in the country’s territorial waters.  This exercise will be conducted using a vessel from the JDF Coast Guard’s fleet.

The agreement will be executed under the auspices of the National Hydrographic Committee (NHC), which is chaired by Director General of the Maritime Authority of Jamaica (MAJ), Rear Admiral Peter Brady.

Under the MOU, the JDF is providing a vessel for the mounting of hydrographic survey equipment, provided by the United Kingdom Hydrographic Office (UKHO) through the Commonwealth Marine Economics Programme, to facilitate the underwater surveys by the NLA.

Speaking in an interview with JIS News, Acting Senior Director of Surveys at the NLA, Major Patrick Aiken, who indicated that the agency conducts surveys of land above and under water, said the outcome of the exercise being embarked on can be used for numerous activities such as in determining the accuracy during a dredging exercise.

“We can use it for the purpose of getting the elevation of the seabed so that dredging can be done to allow deep-hull ships to enter the harbour without being stuck in mud or silt. After the dredging is completed, we would again survey the ocean floor to see that we have achieved the desired depth,” he further outlined.

The NHC which is the government-appointed committee dealing with hydrography and maritime spatial data, is tasked with coordinating the discharge of Jamaica’s responsibility under the Safety of Life at Sea (SOLAS) Convention.

It places particular focus on the regulation that requires a member State to facilitate hydrographic services and ensure that nautical charts are kept up to date in order to ensure safe navigation.

“In the last two years, Jamaica embarked on the updating of the hydrographic charts in key maritime developmental areas to better facilitate coastal navigation marine infrastructural works and other marine activities, through assistance from the UK Government” he said.

Rear Admiral Brady noted that while shipping around Jamaica has increased over the years, with larger vessels, increased water levels and greater depths, the country’s nautical charts are over 40 years old, adding that current data is needed for efficiency.

“Having modern surveys will make Jamaica more attractive and will make ship navigators confident to enter Jamaican waters, and at the same time provide key information for potential investors in commodities such as marine oil and gas,” he added.

The NHC is a Committee of the National Council on Ocean and Coastal Zone Management (NCOCZM), and a Cabinet subcommittee that is Chaired by Minister of Foreign Affairs and Foreign Trade, Senator the Hon Kamina Johnson Smith.  Its membership comprises representatives of the Port Authority of Jamaica; National Land Agency; NCOCZM; University of the West Indies Marine Lab; JDF Coast Guard; the Fisheries Division; University of Technology, Jamaica; Caribbean Maritime University and the Maritime Authority of Jamaica.

The UKHO has been in Jamaica for the past three weeks conducting hydrography training. This will develop Jamaica’s capability to conduct its own hydrographic surveying.

Header: Acting Senior Director of Surveys at the National Land Agency (NLA), Major Patrick Aiken (centre), converses with Colonel Adjutant Quartermaster of the Jamaica Defence Force (JDF), Captain (Naval) David Chin Fong (right), following the signing of a memorandum of understanding to facilitate hydrographic surveys of Jamaica’s seabed. Affixing his signature to the document is Lt. Col. R. Tyndale of the JDF, who signed as a witness

Insert: British High Commissioner to Jamaica, His Excellency Asif Ahmad (third left), observes as Kenre Valentine of the Maritime Authority of Jamaica demonstrates the use of the hydrographic survey equipment on a Jamaica Defence Force vessel that has been fitted with the apparatus to facilitate underwater surveys by the National Land Agency.