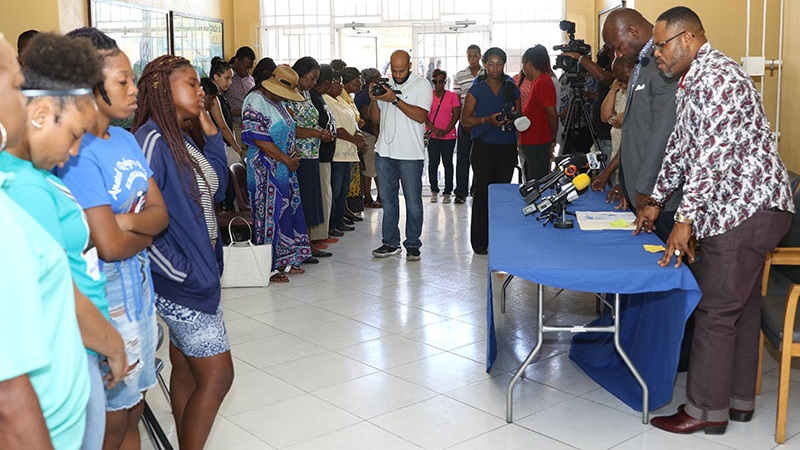 #Nassau, July 19, 2019 – Bahamas – Administrators, students and teachers of Anatol Rodgers Senior High School along with family and representatives of the neighbouring religious community remembered three former students of the school during a special Memorial Service held in their honour.

The service was held in the foyer of the school located Faith Avenue, South, Friday, July 19, 2019. Harcourt McCoy, principal of Anatol Rodgers, extended condolences to the families of the victims.

“It is so unfortunate that the hedge of protection has been broken by these three deaths. We are deeply moved by what has happened. As a close knit family we share in the burden of their families,” said Mr. McCoy.

“I think it is an attack of the enemy on our male students within three short weeks just after school closed.”

The principal said all of the students were destined for success. He knew them intimately and intermingled with them daily. Dorcely was a student of grade 9, Edwards was a 10th grader and Ranger was a member of the Class of 2018.

Theophilus Claridge, District Superintendent, extended sympathy to the families on behalf of the District, the Department of Education and the Ministry of Education.

The school made a presentation to a representative of the family of one of the victims who was present. None of the other students were represented by family at the service, however, it is the intention of the school to also make presentations to them.

Prayers were raised for the families of the victims and students.

Photo Caption: Scenes from the Memorial Service for former students of Anatol Rodgers.